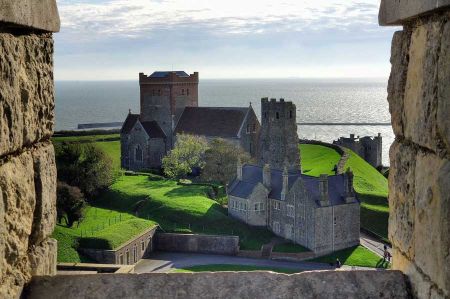 The approximately 563 km long English Channel continues as an inlet to the Atlantic Ocean towards the North Sea and tapers like a sleeve.

At its narrowest point there is the ferry connection from Calais to Dover, which we had just crossed. The shape of this taper also explains the German name Ärmelkanal (English Channel), possibly also as a translation from the French "La Manche".

The Romans in antiquity, however, called the sea area Oceanus Britannicus, which is documented in the writings of Claudius Ptolemaeus, among others. This name was used almost throughout the Middle Ages or translated into the respective language. A designation that indicates the English Channel can be found for the first time on an Italian map from 1450 as Canalites Anglie. This designation was also used on the maps of the leading seafaring nation of that period, the Netherlands, in Dutch as Het Engelse Kanaal, which has also been established in Great Britain as “The English Channel” since the 18th century at latest. English-speaking Northwest and Western Europeans mostly omit the detailed specification completely if it is clear which channel is meant. 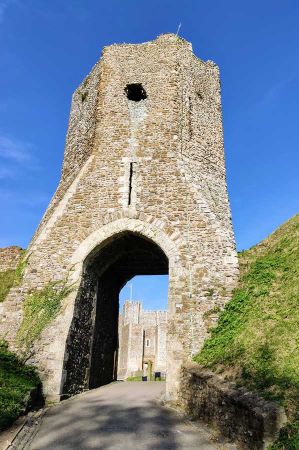 At the highest point of the Dovers castle complex, completely overlooking the English Channel,  which is still preserved today, there are two buildings that stood before the fortress itself was built: the ruins of a Roman lighthouse and an originally Saxon church. The enclosing earth wall was built in the 13th century, above an older wall, which archaeologists assign in the middle of the 11th century and which could therefore also be the location of the original earth wall fortress built by William the Conqueror.

Already in the time of the Romans Dover was an important fortified port called Portus Dubris. The Roman "Watling Street", which led across Britain, began in Dover. The British fleet of the Romans (Classis Britannica) was also stationed in Dover and controlled the strait from there.

In the year 50 AD the Romans built two lighthouses on both sides of the river mouth that still existed at that time. Nowadays, remains of it can be found on the Western Heights on the one hand and in the foundations of Dover Castle, on the other hand, where they were installed. The Painted House is a former Roman administration building and one of the best preserved Roman buildings in Britain. The fortified port of the Roman fleet is right next to it. A Saxon coast fort was built over both in later centuries. 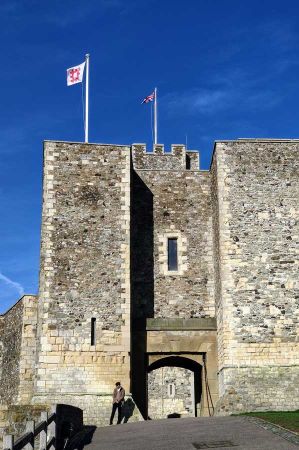 Archaeological research has shown that a new castle was built near the Saxon church of St. Mary de Castro, which later became today's Dover Castle. On the remains of the prehistoric ramparts, construction of the castle was started in 1168 by order of Henry II. In 1180 the Norman church, which now houses a museum, was built in the centre of the complex. In the 13th and 14th centuries, massive ring systems were added as additional security measures for reinforcement. The castle gradually began to take on its current form. The master was "Maurice the Engineer", who managed to build the castle in record time from 1168 to 1178. The inner and outer courtyards and the large rectangular shape, one of the last in this form ever built, also date from this period.

Massive conversions took place at the end of the 18th century during the Napoleonic Wars. Commanding engineer, William Twiss of southern England, completed the redesign of Dover Castle's outer bulwarks as part of his mission to strengthen the city's defence and added additional gun positions to the Horseshoe, Hudson's, East Arrow and East Demi Bastion on the east side, and constructed the Constable's Bastion to better protect the west side too. 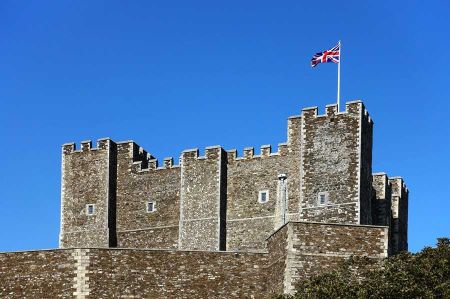 Twiss also increased the lead at the north end of the castle, where he attached an elevated gun platform. By covering the roof of the tower and replacing it with a solid brick vault, he was able to position heavy artillery on it. Twiss also built the Canon’s Gateway to connect the castle’s defence with those of the city.

After Dover became a garrison town, barracks and quarters and storage rooms had to be created for the additional troops and their equipment. Twiss and the Royal Engineers built tunnels 15 meters below the cliffs, and the first soldiers were quartered here in 1803. At the height of the Napoleonic Wars, the tunnels housed more than 2,000 men and are still the only underground barracks ever built in Britain.

With the outbreak of the Second World War in 1939, the tunnels were first converted into an air-raid shelter and later into a military command centre and military hospital. In May 1940, Admiral Bertram Ramsay directed the evacuation of French and British soldiers from Dunkirk from his command centre into tunnels.