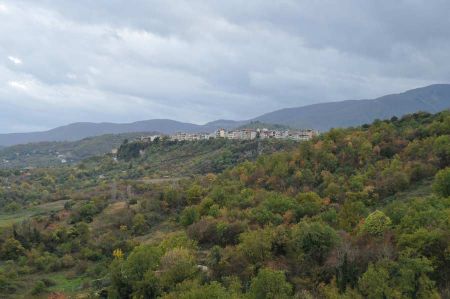 We learned to know Daniel, originally coming from Barcelona / Spain, at the event "Grappa distillation" in Platamonas where he had told us about his start-up company for outdoor activities in Naouss during the talks.

Together with three friends he offers hiking and mountain biking that combined with the presentation of regional products which are integrated into the tours even lead over several days. Our concepts quite comparable, we were quickly in the topic and decided, to pay a visit to the Naoussa region in northern Greece. Of course, a priority reason was also to check the possibility there to set up a camper stop. And as already happened several times before it was also in the interest of some campers at Zampetas, so that quickly there was a tour arranged with Martina and Sven and Carol and David, who had accompanied us several times on trips.

The municipality of Naousa, counting about 20,000 inhabitants, is located on the western edge of central Macedonian Plain, which is formed by the rivers Aliakmonas, Loudias, Axios and Gallikos. Parts of the municipality are located on the west of the small town, northern regions of the Vermio mountains, representing the western boundary of central Macedonian Plain; other Shares located in the municipality in the lowlands or even in the transition from Vermio. The nearest large town in the north is Edessa, smaller town Veria is the capital of Imathia prefecture. For users of GPS navigation to the destination should be mentioned that there are two districts Naoussa in Greece, so the addition Imathia is more than helpful.

We chose the route towards Edessa on the E86, not at least in order to save motorway tolls, then turn to Mavrovouni to the left towards Skidra and followed the road to Kopanos. Approximately in the center, we turned right to go to Naoussa at the agreed meeting point at the cinema where there is a large parking lot, which can be approached by campers as well. Shortly after Kopanos we noticed the steady rise in the road and saw the city ahead of us on different rock spurs, an impressive sight, without any question.

Just in time we met Daniel, who already came from the organization of a mountain race, which took place this morning. Since a short hike through the local vineyards was planned, we went immediately on the way. Arrived at the starting point, Daniel told us about the history of the region, from the time of the Ottoman Empire as well as the current structures of the landscape.

After its conquest in the late 14th century, Naoussa was, until the first Balkan war, part of the Ottoman Empire. On November 1, 1912, the Ottoman administration, was expelled from Naoussa and subsequently occupied by the advancing (Veria) Greek troops from the south. Then Naoussa was de facto part of the Greek state, which was finally confirmed by the Peace of Bucharest in 1913.

Naoussa was the scene of heavy fighting between the Greek rebels and the Ottoman occupation forces in 1821 during Greek War of Independence (from 1821 to 1829). The latter remained victorious despite considerable resistance. A memorial in the center of Naoussa remembered at the Greek victims of these battles.

During the Greek Civil War (1946-1949) Naoussa was the scene of armed clashes between the Communist-controlled insurgents and the regular Greek army under the control of right-wing central government in Athens. On August 10, 1947, the city was attacked by 500 insurgents and occupied temporarily, then had to be freed again. 200 houses were destroyed during the fighting by the fire, including a church.

Economic mainstay of the city or municipality today is, after the years of prosperity of the textile industry, agriculture and especially the cultivation of wine. Both, the wine-growing region of Naoussa and the popular red variety Mavro Naoussis have been named after the city. So Naoussa is also home of the "Wine and Vine Museum".
We should learn the huge acreage a little later, even had the good fortune to meet acquaintances from Daniel that operate a winery, so that there was a wine tasting. Another highlight a little later, when we were able to visit a distillery for grappa, where the distillation is carried out in the typical style of the region.

A wonderful scenic region, but especially inviting to hiking and exploring the wine-growing regions in the Vermio mountains. We will deepen the contact, especially regarding to a possible camper stop.

At the end of the visit today we were going to a mountain village in the area and had a lovely meal in a restaurant in Kato Vermio, we will report later about it.