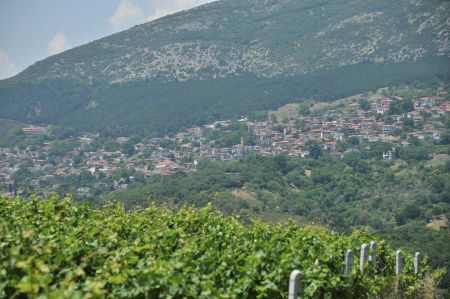 Shortly after leaving the motorway towards Larissa / Athens, you will find a signpost to the right, facing in the direction of Mount Olympus massif with Rapsani.

Rapsani is located about 15 kilometers from the main road in a mountainous with grapevines covered landscape high up on the hillside. Sights are the many old churches, the wonderful mansions, the pretty market square in the town center, the traditional taverns, the gorge of Tempi, the magnificent views over the Aegean Sea and of course the extraordinary beauty of the gods Mount Olympus.

Rapsani, today's small town on the southern slope of Mount Olympus, was probably founded in the 10th century from four smaller villages. According to a legend Rapsani was a very beautiful and energetic woman who united the four small villages to a larger and stronger unit. Six watermills from the 12th, 13th and 14th centuries show that Rapsani was a flourishing Byzantine city, which has a more than 900 year old history. From the "Platia", the village square of Rapsani, you have a beautiful view to the top of Ossa / Kissavos, the sea and the Pinios Delta. Several wine shops are distributed in the place, which also invites you to wine tastings.

Situated at about 500 meters above sea level the site is considered one of the best wine-producing regions of the mainland. The wines from Olynthos, Acanthus, Stagira, Mendi, ... belonged to the top wines of Greece in ancient times. From Chalkidiki the wine culture spread throughout Greece and in large parts of the Mediterranean. Preferably, the specific local, very ancient red grape variety Xinomavros is grown drawn together with the endemic plants in Rapsani, Stavroto and Krassato, in mixed culture and is pressed together.

Xinomavro means sour (Xino) and black (Mavro), because it leads to wines with strict structure and dark color. Xinomavro wines have a particularly large aging potential. Krasato is grown in the area of Rapsani only. Krasato gives rich wines of mild acidity and many fast-ripening tannins. Stavroto is cultivated in the area of Rapsani only. The Stavroto berries are of normal size with moderately thick skin. Stavroto wine is of medium alcohol content, with moderate acidity and color. Stavroto is tannic with rapidly maturing tannins.

The more than 2,900 high Olymp Mountains as a contrast to the proximity of the Aegean Sea form a unique microclimate that characterizes the unique character of the wines of Rapsani. Steady winds do not allow misting, thus reducing the risk of disease of the vines. The Mount Olympus delivers sufficient melt water and mitigates the heat of summer. Many, many hours of sunshine provide fully ripe grapes.

The vineyards are located at an altitude between 800 meters and 250. In Rapsani the soil is mainly composed of iron-containing shale, which is poor in organic substances. The high iron content regulates the water capacity of the soil, whose structure can penetrate deep into the subsoil, the vine roots. The slope of the vineyard ensures the water flow during the rainy winter months. Sand and clay in the subsoil also provide the hot summer for sufficient water supply for the plants.

The grape juice from the slopes of Mount Olympus, from the indigenous varieties Xinomavro, Krasato and Stavroto is very powerful, well structured and can be stored long. The Englishman Edward Clarke described the Rapsani already in 1816 as "the best tasting wine from all over Greece" .1971 was the Rapsani wine region one of the first, which was awarded the title "Appellation higher quality". Since the 18th century the vineyard is the most important source of income of the inhabitants of Rapsani. Unfortunately, the crisis in Greece showed its effects, one possibility to face it is now increasing wine tourism, which is also reflected in the inns of the region: delicious, local cuisine, of which we could be convinced.

City Walk - to the down town of Thessaloniki