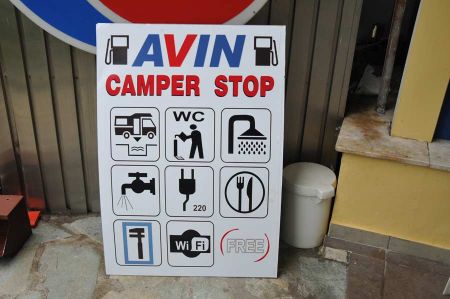 It is already a few weeks ago that we had met with Nikos in regards to our project and to further discussions on the progress of his offers to explore regional wines in relation with hiking around Rapsani.

In the course of discussions at that time, which inevitably should turn to the development of tourism for the benefit of the local population, we had also suggested to open up the open space next to the restaurant and gas station as a camper stop, so campers would get the opportunity to an annually open stopover at the route between Thessaloniki and Athens / Peloponnesus, which could also contribute to the revitalization of the restaurant at the same time. With regard to appropriate offers on guided wine tours it would also be possible to make the potential of the wine-growing regions more well known, what would be very good for the region.

Shortly after our arrival in Thessaloniki, we sought again to contact Nikos and arranged to meet in accordance with the spot. Nikos had just some "Farm Bed" to visit, this time there were five students from the United States, together with whom he wanted to harvest chestnuts, an event that we were very interested in as well, especially for the evening, after a meal with wine tasting, chestnuts should be roasted on an open fire. In short, it was a culinary interesting invitation, which we gladly liked to join. So we decided, together with Sven (our readers will be aware of him as a traveler on his way to Australia), to go to Rapsani. Our interest was even greater when we learned that the first significant steps to establish the Camper Stop were already implemented. Our tensions grew.

A little later we were talking with Tobi, who later the day wanted to leave for Meteora monasteries, but then listened with great interest about our meeting with Nikos and the opportunity of visiting the wineries. Quickly a stopover at Rapsani was arranged with him - a first guest on Camper Stop "AVIN"?

As agreed Nikos awaits us already at the AVIN station, opposite the train station in the municipality of Rapsani which represents something like the central point of contact for all residents. They proudly showed us the road sign already completed "AVIN" camper stop, which should be installed shortly later. Unfortunately it currently rained so strong that we shortened the tour of the place, however, looked at toilets and shower. Not new, but clean and tidy. Even a removal station for fresh water was already set up, as well as the emptying station for the sewage water. In short, essential points that a camper needs were already in place. Further steps will be implemented at short notice, so we were told to. Metallic boxes for electricity had been manufactured, which are set up for campers along the parking bays. A first box should still be ready for operation during the next hour. Little later we were on the way to the chestnut trees always up the mountains to Rapsani after explaining the guys from the restaurant to contact us as soon the fire brigade-camper of Nadine and Tobi arrives.

When a little later the already announced first camper guests arrived, all those present were delighted and happy. Delighted also by the two because they made a visit to the restaurant where we later on met with them. After dinner we went to the farm of Nikos where all introduced each other, because the Americans were back from harvesting chestnut as well. On the farm there is, next to a guesthouse, the building of a kitchen still under construction that will serve the needs of guests lateron. A delightfully relaxed atmosphere made for fast casual discussions of international guests from at least 6 different countries. After a first glass of wine then a small wine tasting to be held on the neighboring farm, where we started walking on the path. Here Nikos senior was the host who kept disappearing in its cuisine and delicious snacks produced whose basic substances completely originated from his farm area. Only the bread was not made itself this time. In between, there were of course delicious house wine and homemade grappa, which tasted delicious. Of course, everything in moderation, but this is actually, at least for us, no question.

A little later we set ourselves in motion to another neighboring farm where a good fire in the magnificent fireplace already blazed. Again, numerous, homemade delicacies were on the table that have been offered to guests. There was young wine and Grappa again who showed a harsher character here and slightly tasted like almond. So many of the details of future walking and Wine Tour concepts were discussed, which are already leading to concrete offers to guests shortly later. The production of a flyer is an important point, which is to highlight the various possibilities of the region around Rapsani especially for the future Camper guests. There is still a lot to do, but the way is clearly demonstrated. Another meeting has been agreed for the coming weekend, since then a distillation evening for the production of grappa is scheduled.

It is already dark when we make our way back to the restaurant on the main street where we first say goodbye to Nadine and Tobi who will stay as the first guest on the AVIN Camper stop. For Sunday they have already announced themselves back to the farm of Nikos to acquire a few bottles of delicious wine. We will continue to report.

Caravans and motorhomes - more diversity then ever!