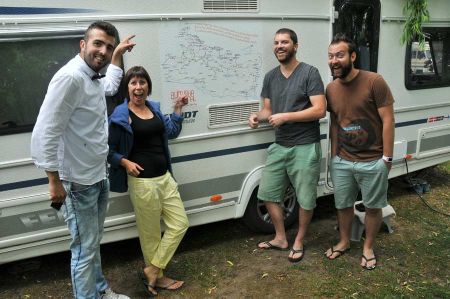 An interesting side aspect of our project "A journey of Intimacy and Culture along the Roman Roads" is getting to know the most varied camping and camper sites and the vehicles located there.

Sure, people have very diverse views or demands on their vehicles, which sometimes stop representing only a holiday home, but also leisure sport or a combination of both. No wonder that one finds many interesting vehicles that has inspired us to this little collection of images. Perhaps you too can enjoy the pictures collection.

Motorhomes and caravans are motor vehicles, with or without its own engine, with a suitable Residential Interior Design, which vary depending on the budget and it owners own request. Insofar each of the essential functions of this fascinating vehicle group are quite clear that there is such an immense number to be seen on the roads and campsites today. Where the number of users, in contrast to some other sectors of the economy, is actually still strong in terms of rise throughout Europe. Mostly mobile homes and caravans are used as recreational vehicles for camping as well for permanent campers and for vacations with alternating standing. However, be campers are also increasingly popular venues at different work places of business travelers as commercial agents, assemblers or showmen to stay or as a mobile office in today's mobile world.

First "tourist trip car" were manufactured in the UK since the late 19th century. They were sometimes very luxuriously furnished, had two-axis and initially drawn by horses. Shortly after the introduction of the first automobile, originated in England in 1908, the first "Caravan Club" was established. At the beginning of World War II there were already several thousand caravans on the British Isles.

The German equivalent to the English "touring car" was invented by Arist Dethleffs (1908-1996) in the year 1931. The actual whip- and ski-grocer called his companion "residential car", thus fulfilling the wish of his fiance, the painter Fridel Nobleman who, as she writes in a letter to her future husband, "I want something like a gypsy caravan in which we travel together and I still could paint imagines. "Living Car" was a misleading term because he was doing a real (living) trailer. It was completed at Easter of the following year.

The "Living Car" became a sort of wedding gift. The newlyweds started traveling in the same year throughout the Republic and made a stir everywhere, so soon numerous orders arrived at the inventor Dethleffs. A short time later already Arist Dethleffs moved on the serial production of its now modified "living cars" and founded the company Dethleffs. With this brand name motorhomes and caravans are manufactured until today.

From the 1950s caravans break through, particularly in East Germany, where the caravan became a status symbol. According to the possibilities of available vehicles it was relatively small single axle vehicle. No question - luxury in the facilities - no way.
Today there is such a large range of vehicles and vehicle types that can convert to almost any of owners requirements. And if you still do not find what you really want, there is the possibility of self-realization in self-construction or self-expanding. Enjoy the pictures!

Story of an alternative life on the camping site