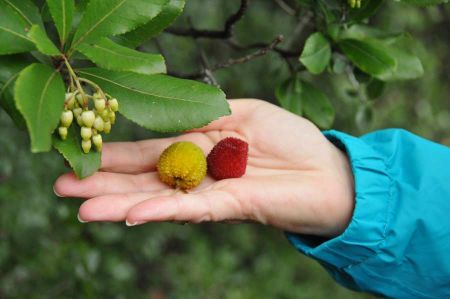 During our way to Rapsani to the newly opened Camper stop we again had passed the village of Platamonas where we already noticed the mighty fortress on the rocky spur during our last trip.

Today the traffic meanders in some narrow serpentines through the approximately 2,000 inhabitants counted village situated in the south of the Region of Central Macedonia. We, that are Martina and Sven, and Carol and David from Liverpool this time, who all are guests at Zampetas and want to spend the winter time in southern Europe. Shortly after passing the village center we turned left to the parking facility at the foot of Castle Hill, which now, at the end of October,is completely empty. Then within the ascent we went to the mountain fortress.

In the Middle Ages and the early modern period the place Platamonas played a significant role mainly because of this fortress called Kastron. The castle is located about 2 km north of the modern village at a strategically important location and it once controlled the passage of people and material along the coast of the Thermaic Gulf from the north (the direction of Thessalonica and Odessa) to the south (towards Larissa or Athens) by the Tembi valley, whose northern exit is located about 10 kilometers south of Platamonas.

The Frankish king of Thessaloniki, Boniface I of Montferrat built the fort in its present form in 1205 on the walls of a Byzantine fortress from the 6th - 10th Century. From 1389, the castle and the town fell under the rule of the Ottoman Empire. After the liberation of southern Greece and the port of Thessaly getting to the Kingdom of Greece in 1881, the castle became again important because it was situated directly at the Greek-Turkish border. With the conquest of the Greek region of Macedonia by Greece in the First Balkan War, the castle lost its strategic importance and was neglected.

Arriving at the entry of the castle, we were again surprised to notice, that, like in lot of other places, the opening time of the castle was nearly finished. Opening hours are from 8.00 am to 3.00 pm, what a silly time. A very unpleasant situation for tourists, who will certainly not come in the morning at 8:00 clock already to visit the castle. Why not starting at 10.00 am and open until 6.00 pm. Thus, we could indeed take a quick look inside the castle courtyard, more time, however, was not possible since the guard wanted to leave. Too bad.

But then we found a narrow path along the castle walls, so, our first impression was like that, it will initially carry us around the castle. Without hesitation, we followed this path which, a little later, forked and a small path went down which should lead to the beach. We went to the partially slippery descent, we should have used our hiking boots which could have been better to overcome. Louder and louder the sound of the sea became, although dark clouds announced rain but surprisingly it stayed dry. On the way we came across some interesting fruit, as well as on the bushes, which showed all stages of vegetation: flowers, small fruit bunches, green and red fruits, ripe fruits. Despite subsequent demand we could not determine the type of the plant. Maybe you can help us, please check at the pictures.

Today, the castle is being used for theater performances, music concerts and other cultural events. In Platamonas there are several campsites and numerous hotels, inns and cottages, but they were almost completely closed. The beach combines rocks, pebbles and sand, of which the summit of Mount Olympus can be seen. For the clear water and the clean harbor Platamonas was awarded the Blue Flag of the EU in 2002 and 2006. Today, however, it was very stormy, so the waves whipped on the beach.

We discovered the remains of a railway line that once ran along the beach. What an interesting way to create a cycle path along the coast. Why not even built a connection until Rapsani.

Our way back to the car then proceeded along a street with little traffic, which also passes a fountain. High and very old plane trees with leaves of big quantities ensured next to the gray sky for a typical autumn picture. A short, although interesting trail around the castle of Platamonas was done. Now we will watch the distillation of grappa in a local company. First, however, a stop at the new Camper stop was obvious to examine about the construction progress. And lo and behold, the yard area was leveled and sockets were installed. The first guests could come.