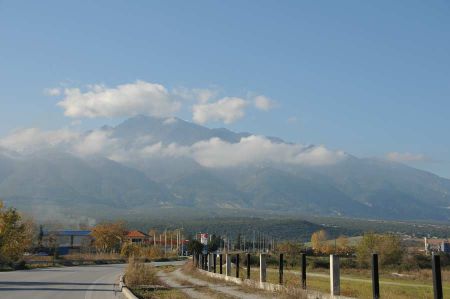 Litochoro is a small town at the foot of Mount Olympus, about 7 km from the coast, which is considered one of the two possible access routes into the Olymp Mountains.

The site is worth a visit especially the old town with its picturesque streets and churches south and west of the village square where couple of different mountain tours are offered to the peaks where based on mythology the ancient Greek gods lived. In the past people were afraid of climbing the rugged mountains, but as evidenced by archaeological peaks findings from the past show that ancient sacrifices for the twelve Olympian gods were offered at the Aghios Antonios. Litochoro today applies, especially due to its location between sea and mountains, as a starting point for mountain hikes on to the nearby Mount Olympus and through the ravine of Enipeas, which is locally also known as "Enipeas Canyon". Lately walking routes and paths have been sign posted and in summer and autumn season also a network of shelters is operated.

We started from Camper stop Zampetas on the motorway towards Athens, which runs between the village of Litochoro and the seashore and applies as the most important north-south transport corridor of Greece: Highway 1 and the railway line Thessaloniki - Athens. The section of the motorway between Athens and Thessalonica is, that should be noted here, not only toll road, but really expensive one!! Whenever possible on your way, you should avoid the motorway!

It's beginning of December and despite this season, there is bright blue sky, pending a brief tour through the city of Litochoro. On the way we will meet the municipal gallery in a historic house in the Western Old Town (Filippou Street 2, entrance to the vas Kon / Nou.) and works by the painter Philopoemen Constantinides (1909 - 1992) are exhited here as permanent exhibition. The collection was bequeathed by his widow to the community, because the mother of Constantinidis was from Litochoro. As well the Nautical Museum at the New City Hall (Agiou Nikolaou Street 15) presents interesting exhibition that were provided by the professional association of local seamen, as well as the ship modelers Dimitris Maras and Asterios Parlitsis.

At the 9th century the area of Litochoro was, especially the slopes of Mount Olympus, densely wooded and rich in species. Due to the increasing settlements until the end of the 9th century, the forest vegetation was pushed further and further back.

With the expansion of the Ottoman Empire since the second half of the 14th century, Ottoman ruled Litochoro. The annexations of Thessaly to the Kingdom of Greece at the end of 1881, Litochoro was remaining as part of the Vilayet Selanik in the Ottoman Empire (Ottoman administrative district Thessalonica).

As in 1897, the Greek fleet bombards the berth or port of Litochoro during the Turkish-Greek war in 1897, followed by the short duration of Katerini and Platamonas ingestion shortly after the outbreak of war in April 1897th

As part of the First Balkan War, Greek troops land on the coast of Litochoro on October 22, 1912 and take the village below. After the Second Balkan War in the summer of 1913 Litochoro is definitively confirmed as part of Greece by the Treaty of Bucharest 1913th

In the night of 30 to 31 March 1946 Litochoro acquired a special historical significance: the attack of the rebels of the Democratic Army of Greece (DSE) to the police station of Litochoro on the night before the day of parliamentary elections is considered as most historians of modern and latest Greek history when the outbreak of the Greek civil war happens 1946-1949.

After the brief digression through Litochoro it is time now to finally go up on Mount Olympus, who awaits us snowy.