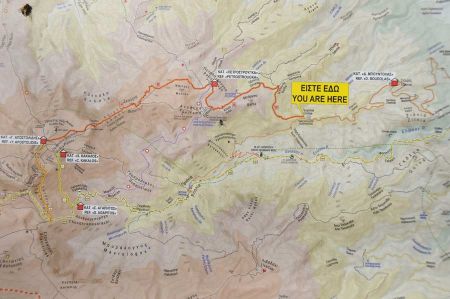 After our explorations of Mount Olymp per vehicle a first hike is now, even in spite of advanced season with first snow starting from about 1400 meters, carried out at the Olymp.

However, we choose the so-called Route E4, which starts in the upper part of Litochoro and leads to the former sawmill in Prionia at the restaurant parking because the mountain huts and even the restaurant of Prionia are already closed. The sunny weather is inviting us to this autumn like hike during these early December days.

We park our car in the parking lot next to the Church of Saint Nicholas, right on the river Enipeas which runs along in the gorge at the parking lot. An attendant will pick us up from the restaurant Prionia later, so we agreed. At Restaurant Mili the marked path E4, which then initially always follows the river course through the canyon Enipeas begins. After about four hundred meters on a way to Vithos, you can dismount to the river, the trail then longer runs on the south side of the canyon above the Enipeas River, after approximately 3 km you get back near the river. Every now and then the path changes to the other side of the river, the river is crossed seven times on wooden bridges.

After about 3 hours of continuous but moderate rise we arrive at the cave churches Agios Dionisios, where a spring rises. Time for a short rest. Another tap continues upriver to the monastery of Agios Dionisios, which we had, however, already hit by car while we could look at and evaluate the structural restoration measures. Once completed, the monastery will be an additional attraction for hiking on Mount Olympus. Now however, it was closed to visitors.

Approximately 500 meters further away from the path to the left there is a small waterfall of Enipeas river, however, it is only a little water, which forms the waterfall at this time of the year. After the snow melts in the spring more water will probably be present. After about another 1,500 meters we reach the parking lot at the former sawmill Prionia and have reached our target after about 9.5 kilometers and an altitude difference of about 960 meters the end of today's walk. Slowly is felt that it is quite cold and so little later sitting in the warm car we look forward for the return trip down from Olympus.

Another information panel to the left of the road informed about the rules in the national park and the various ascent routes, as well as the marked yellow one to Refuge A, here in the map. We are located at the fork "You are here", from where the orange-scale path leads to the mountain huts that offer overnight accommodations in the summer.

We are driven by the hunger a little later into the restaurant Stavros (40 ° 06'42.6 "N 22 ° 28'05.4" E), which is currently the only open restaurant on the way back to Litohoro, which is, due to the low clouds barely visible. There are baked feta cheese and veal cutlets at blazing log fire, plus a tsipouro and everything from their own production, so they let us know.