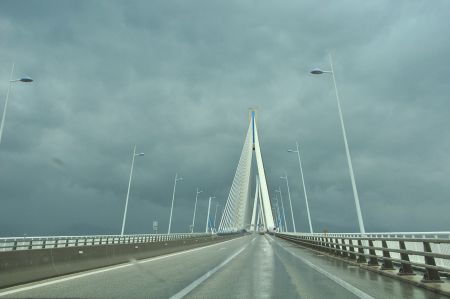 After our surprisingly pleasant and interesting stopover in Nafpaktos we had decided to cross the Gulf of Corinth via Rio-Andirrio-Bridge.

Due to the impending storm, we wanted to win some time to escape from thunderstorm even much cheaper but more time-consuming ferry passage is available too. For our final destination Gythio we still would need couple of hours. During the approach to the bridge cloudiness increasingly dense and dark, rain hinted with powerful lightning and thunder.

The Rio-Andirrio Bridge or officially Charilaos Trikoupis Bridge was opened in 2004 as a road bridge crossing the sea from Rio to Andirrio which forms the entrance of the Gulf of Corinth. The bridge connects Andirrio on the north bank with Rio on the Peloponnesus, about eight kilometers east of Patras, a well-known port for ferries to Italy. The bridge attracted tremendous sensation because it was considered impossible to build a bridge in an earthquake zone over a length of 2.5 km and in about 65 m deep sea, which has no stable surface on and in the sea ground.

The totally 2,883 m long bridge consists of the 2,252 m long main bridge crossing the sea, the 392 m long ramp bridge for access to Río and the 239 m long ramp at Andirrio. The main bridge spans in parts of 286 m, three times 560 m and again 286 m. The two central pylons are 230 meters high, they are standing in 65 m deep water and rise 164 m further above sea level. The two outer pylons are in slightly less deep water and reach a height of 141 m above sea level. The bridge deck is shaped by an all strait spanning buckle upward. The middle passage has a clear height of 52 m. Based on the length of the main bridge, it is the second longest cable-stayed bridge in the world.

The almost 2.5 km wide and usually about 65 m deep entrance to the Gulf of Corinth has geologically extremely difficult conditions. Also 100 m below the seabed no real carrying rock could be found, the ground consists rather of sand, silt and clay. The entrance is located on a tectonic fault zone, which annually moves the Peloponnesus away from the Greek mainland several millimeters which as well cause numerous earthquakes. The entrance is also known for frequent storms and has quite a lot of boat traffic.

A foundation of the bridge with the conventional meaning of civil engineering dropped out due to the water depth; only possible solution due to the measurement was to use the construction methods of off-shore drilling platform techniques. First, the ground in the sites provided for the pylons was stabilized by hammering long steel tubes with a diameter of 2 m and a length of 30 meters into the ground on a circular area of ​​about 100 m diameter. On each circular area about 200 tubes were introduced in this manner not to have the function of a bored pile foundation, but only for the soil stabilization despite the similarities. The circular areas were then covered with a 2.75-3.00 m thick layer of aggregate (10/80), which was exactly leveled to the predetermined level - in depth of 65 m it became a new challenge. This layer are intended to serve the pylons in the case of earthquakes as bearings and prevent violent lateral impacts being transmitted to the pylons.

On this plain the foot of the pylon was resting, which has no fixed connection to the ground. It is a circular concrete structure with 90 m in diameter, consisting of a flat bottom plate, from 9 to 13.5 m high side walls and a conical rising towards the central cover. The construction is stiffened inside by annular walls and radially extending partitions. It´s reinforced concrete was used with a steel content of 300 kg / m³.

This round concrete structure supporting the pillar, which in its lower part has a round, tapered profile with diameters of 38-26 m. On the surface it passes into vertical, octagonal pillars, which expands to an inverted, about 15 m high pyramid under the deck, which ends in the square support of the superstructure, which has a side length of 38 m. This inverted pyramid is structurally the most difficult point of the pillar. The concrete here has a steel content of 475 kg / m³, locally even 700 kg / m³. The corners of this square are the basis for the four legs of the upper part of the pylon, which are 4 m wide hollow boxes made of 4, in the form of an A united in a high peak.

The 27.2 m wide and 2.82 m high bridge deck is supported by 368 steel cables. Each compartments on each side thus consists of 23 ropes that have lengths between 77 m and 293 m. The ropes are tight fitted on its anchorage to the roadway deck with dampers, which are to prevent an uncontrolled oscillation by earthquake.

The bridge deck is a composite system of a steel frame with two 2.20 m high side members and every 4 m inserted crossbars and a reinforced concrete slab for the roadway. The bridge deck is a continuous over its full length of 2.252 m without interruptions construction. The deck is not laying on the pillars, but rather depends solely on the ropes. Thus, it is not pressed by lateral winds against the legs of the pylons, the damper elements are blocked. The lock rings are about to break at a great earthquake, so that the entire slab can swing and thereby compensate for the movements of the pylons. Between the ends of the bridge deck and the access ramps exceptionally large joints were provided, which can accommodate not only the enormous thermal expansion of the long bridge decks, but also tectonic shifts. The specially developed transition structures are currently the largest of its kind.

The bridge is equipped with various sensors and measuring devices which detect external influences on the bridge and its state and forward the data to the supervising office. Here earthquakes are detected as early as possible and the bridge can optionally automatically be closed to traffic.

Traditional Nafpaktos - on the way to Peloponnesus