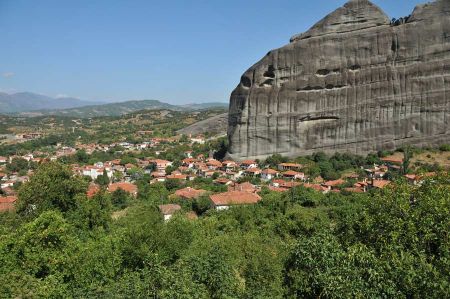 Our tours through the countryside at Meteora had led us into Kastraki / Kalambaka city center too and, as a small town with no fewer than 8,330 inhabitants, is now interesting to tourists due to a variety of restaurants, cafes, shopping abilities and strolling too.

The very steep cliffs and the monasteries of Meteora itself have indeed to be seen as the main attraction, classified as World Heritage Sites, which also characterize the cityscape, but you should not ignore the old town of Kastraki. A tour through the old town up to the chapel and then up to the unique rock pillar is worth visiting. Rock falls caused by earthquakes have been responsible to destruction of the city, now large parts of the old town with some beautifully restored houses are renewed, however, they are to be admired along the way, moreover, with a colorful array of flowers and plants.

The city Kastraki / Kalambaka was founded on the site of the destroyed ancient city Aiginion during the Hellenistic period, which belonged to the people of Tinfei according to the records of the historian Strabo. It is mentioned several times by Livy  during the Macedonian War, in 167 BC, that it was destroyed by the Romans. During the civil war between Caesar and Pompey the city was occupied by Domitius Calvin.

In the 10th century Kalambaka was known as Stagoi, a Byzantine fortress and bishopric. Of the medieval monuments, only the Cathedral and the Church of the Dormition are preserved. In the early 12th century, the late antique church was built on the site of an earlier structure. Relics of an Ancient Greek temple - probably in honor of the god Apollo - were found during excavations and served as a foundation for the later following buildings.

Stagoi is first mentioned and described in Diatyposis written by the Byzantine Emperor Leo VI, called the Wise (886-812). Dating back to 1163, a reference to the castle of Stagoi had been found. In 1204 Stagoi fell under the Despotate of Epirus. At the end of the 13th century Stagoi fell to the Duchy of Neopatria. In 1334 Stagoi was again taken over by the despot of Epirus, John II Orsini and soon it fell back under the control of the Byzantine Empire. In 1348 it was conquered by the Serbs under Stephen Dushan and reached the "peak" of the crew during the reign of his brother, King Simeon Uroš.

When the Turks conquered Thessaly, Stagoi was filed under the administrative regulation of the Pasha of Larissa and later as Sanjak of Trikala. The rename to "Kalambaka" took place about six or seven centuries ago, more precisely this date can not yet set. The name is of Turkish origin and means something like "mighty fortress".

From the beginning of the 10th century Stagoi was called bishopric to enjoy privileges and donations from the pot of the Byzantine emperors. Stagoi possessed significant tracts of land and had dependent farmers in the neighboring settlements. In addition to the fields in northwestern Thessaly, the territories claimed an extensive mountainous zone in Asia and the Pindos Mountains too. The diocese Stagoi with an auxiliary bishop of the Metropolis of Larissa, was retained and were placed, with some small interruptions, until 1900, when it was merged together with the diocese Tricca and with the city of Trikala as a seat of the metropolis.

Big parts of modern Kalambaka is located in the valley of the Pinios, passing the city from the east towards Trikala. Thus, the environment of Kalambaka in the northwestern region is like the plain of Thessaly, which is formed by the Pinios and its tributaries. In the municipality of Kalambaka at the village Mourgani the two sources of the Pinios, the Malakasiotikos and Ion (Mourgani), meet and together form the river Pinios. West of the city and also to the west of Pinios the mountain ranges of Koziakas start which limits the Thessalian plain to the west and represents the eastern beginning of the Pindos Mountains.

Kalambaka is the end point of a railway line coming from Volos. There is a daily intercity connection to Athens and some regional connections to Paleofarsalos (transit traffic), so that there is also a tourist connection to the railway network and the international airports.

Due to existing campsites here with very good conditions for a longer stay to explore the Meteora rocks and monasteries, the area is a very interesting area for mobile travelers. There are excellent hiking trails, an endless number of climbing options that still offer many options.

The Theopetra Cave next to the Meteora Monastries