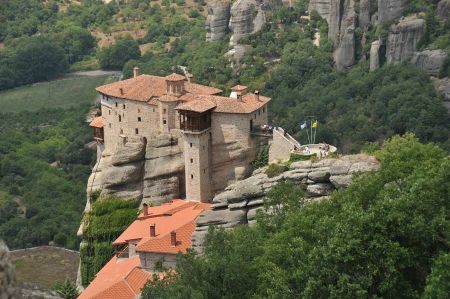 The first impressions of our visit to the Metéora Monasteries we had already put online in our blog, now more information about this unique landscape with its medieval monastic buildings will follow.

The Metéora monasteries are located east of the Pindos mountain range near the town of Kalambaka in Thessaly region and are published in the list of monuments of UNESCO World Heritage Sites. The monastery complex originally consists of 24 individual monasteries and hermitages (hermits are usually used by clerics who live a retired life of praying in solitary hermitages, caves and / or small churches), of which only six are inhabited today. The remaining eighteen monasteries are either difficult to reach or have been abandoned due to the existing danger of collapse due to their age.

The hermits in Christianity belong to the oldest forms of consecrated life and are the earliest form of Christian monasticism in Europe. The first hermits are found in remote places, such as caves or small churches. During the Christian persecution, St. Anthony founded the first Christian communities in today's Greece during the time of Roman King Diocletian, more or less loose associations of hermits living apart from towns. In contrast, by the initiative of St. Pachomius between 320 to 325, the young Egyptian established the first Christian monasteries where the monks lived and worked together. A kind of hybrid are the monasteries of the Carthusian in which the cells of many hermits lived together in a joint plant.

The name Metéora derives from the Greek meteorizo, which can be roughly translated as "lift into the air". The name Metéora thus describes the situation of the monasteries, which were built on high sandstone cliffs and seem to float in hazy air sometimes. The first documented hermitages in Metéora exists since the 11th century, traditions even report a settlement before the 10th century. Over the years these hermitages grew into an organized community along the lines of the holy Mount Athos and formed the monastery Doupiani.

At their peak in the sixteenth century there were 24 monasteries at Metéora in Greece. They were created to serve monks and nuns following the teachings of the Eastern Orthodox Church. Much of the architecture of these buildings is Athonite in origin. Today there are six monasteries still functioning, while the remainder are in ruins in largely. Most of these are perched on high cliffs, now accessible by staircases cut into the rock formations. Of the six functioning monasteries, the Holy Monastery of St. Stephen and the Holy Monastery of Roussanou are inhabited by nuns while the remainder are inhabited by monks. The total monastic population of the Metéora monasteries in 2015 was 66, comprising 15 monks in four monasteries and 41 nuns in two monasteries.

The Monastery of Great Meteoron - This is the largest of the monasteries located at Metéora, though in 2015 there were only 3 monks living. It was erected in the mid-14th century and was the subject of restoration and embellishment projects in 1483 and 1552. One building serves as the main museum for tourists. The Katholikon (main church), consecrated in honour of the Transfiguration of Jesus was erected in the middle of the 14th century during 1387/88 and decorated in 1483 and 1552.

The Monastery of Varlaam – The Monastery of Varlaam is the second largest monastery in the Metéora complex and in 2015 had the largest number of monks (seven) of the male monasteries. It was built in 1541 and embellished in 1548. A church, dedicated to All Saints, is in the Athonite type (cross-in-square with dome and choirs), with spacious exonarthex (lite) is surrounded by a dome. It was built in 1541/42 and decorated in 1548, while the exonarthex was decorated in 1566. The old refectory is used as a museum while north of the church is the parekklesion of the Three Bishops, built in 1627 and decorated in 1637.

The Monastery of Rousanou / St. Barbara was founded in the middle of the 16th century and decorated in 1560. Today it is a flourishing nunnery with 13 nuns in residence in 2015.

The Monastery of St. Nicholas Anapausas, built in the 16th century, has a small church, decorated by the noted Cretan painter Theophanis Strelitzas, in 1527. There was one monk in residence in 2015.

The Monastery of St. Stephen has a small church built in the 16th century and decorated in 1545. This monastery rests on the plain rather than on a cliff. It was shelled by the Nazis during World War II who believed it was harboring insurgents and was abandoned. The monastery was given over to nuns in 1961 and they have reconstructed it into a flourishing nunnery, with 28 nuns in residence in 2015.

Agii Apóstoli: A monastery, which has just been preserved by ruins and a cistern. Documented from 1551.

Agion Pnévma: The out of the rock carved Monastery of the Holy Spirit is poorly preserved. Two cisterns, a sarcophagus, some cells and hewn from the stone altar and examples of the plant, which according to tradition dates back to the 14th century.

Agios Antónios: Smaller monastery from the 14th century, of which only a small church has been preserved.

Agios Mothéstos: Monastery complex, which is not obtained. First mention as hallowed ground in a letter from the 12th century. Documented in 1614th

Agios Nikólaos Bádovas bzw. Kofinás: Non-preserved monastery, which was built in 1400 in a cave. 1943 bombed by German occupation troops and destroyed.

Agía Moní: Monastery on a hilltop between monasteries Varlaám and Agios Nikolaos Anapavsás above the valley floor to the street, historically documented in 1614, then inhabited by more than 20 monks. Only ruins remain.

Moní Ypsilotéra auch Kaligráfon not preserved monastery. As the nickname suggests, is known for the manuscripts produced there.

Panagía Mýkani: First, probably built as a cave church, first mentioned in 1358, the monastery expanded later. Mentioning of the monastery in an episcopal letter from the year 1541. The monastery has not survived.

Pantokrátor: Historical documents mention the monastery in 1650. In the northwestern flank of Dupianisteins, today remains of walls are still standing.

Agios Dimitrios: In ruins preserved monastery on the Dimitriosstein above the monastery Ypapantis. Was destroyed by Ali Pasha of Janina, as Greek insurgents had set up their headquarters in the convent.

Andrea & John - on the target of their project - the Olymp