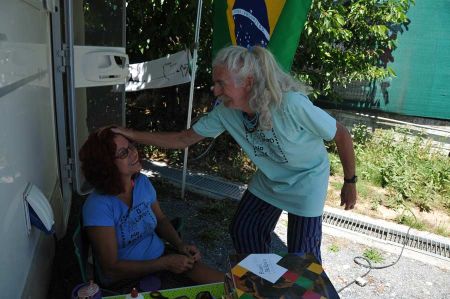 We had already reported about Andrea and John, who want to bring clear spring water from Mount Olympus to Brazil within their ecological project in order to point to the pollution of their own rivers in Brazil and to achieve improvement and attention by the aid of the media.

Their idea is to be back in time for the 2016 Olympic Games in Brazil to locally initiate the pure spring water of Olympus into the river system at their particular town, which this undoubtedly is diluted and thus cleaner. We are very impressed about their project, so we decided doing some excursions together.

Of course, the project is likely to be understood as a symbolic action that accordingly should be communicated via the media. This will be easier to understand if you know about John's activity as film director and Andrea´s works as a social worker in the Favela's of their home town.

The journey through Europe is planned and carried out in a camper, which is precisely fitting to their main idea of leading along little known regions so far as a learning process for themselves. Even the main aim of their trip is the spring water of Olympus, they use the journey and being on the road against pollution of nature, especially against the huge usage of plastic bags, which rinse in immense amounts of trash from rivers into the sea and thus is ticking like a time bomb. Sometimes fish can hardly distinguish whether it is eatable plankton or just waste of microscopically shredded plastics. What stays in animals body is creating diseases and illness turning back to human when consuming "healthy" fish, not to mention the millions of tons of plastic waste in the oceans.

So often we found Andrea and John collecting plastic bottles and later properly disposing it (if one can always speak of proper disposal in the disposal by dustbins). So even during the current tour at 1,100 meters altitude, a plastic water bottle was found in a small creek and collected. A good example, and very easy to carry out for each of you too.

A little later, we arrived at the mountain station Prionia where we stopped next to thecreek, which is fed by the melting snows of Olympus. The road up to Olympus ha reached it end, from now on hiking routes are the only option. Little later we reached the spring of the creek at about 1400 meters. Andrea and John when they arrived at the creek spontaneously decided, that taking of the fresh spring should happen over here. So quickly their posters were spread, which should serve as background for some filming and photographing during the taking of the water.

Both, however, were exhausted from some recent itinerary before, so they wanted to get some rest first. An occasion for us to leave them alone in their preparations and to continue to explore the area.

After our return taking water and filming and photographing were done, both made a very satisfied, yes filled impression, because their first main objective of the project was achieved. It could be thought of the return journey by motor home, or to put it in other words: job done!

Sycamore Trees at Pinios River - an idyll at the ancient Salambria

Exploration hike around the fortress of Platamonas