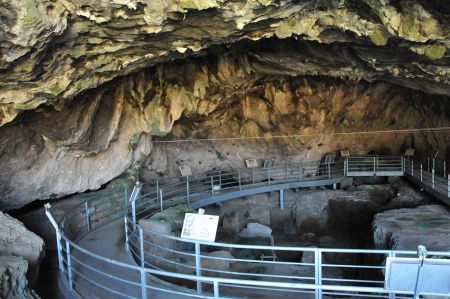 During our first passage through the formations of the Meteora rocks, we already noticed the numerous caves in the rocks, some of which were shared by the monks for a more independent living or due to confiscation.

For sure, the caves were not being used by monks alone. Some of the entrances were partially covered with stones to protect the caves from the influences of nature, especially during the winter especially in the region Meteora, known for strong winters. Particularly noteworthy in this context is the Theopetra Cave near Kalambaki in Theopetra.

In Kalambaka you can already find first waypoints guiding to Theopetra Cave, which is located above the small village. The cave is easily accessible and visible for wheelchair users too, because there is a stair lift up to the entrance. If it is not closed! We had to take the luck or bad luck of one of these exceptional "opening times", which once again could not be explained. Although comprehensive exact opening times attested, even still at the entrance to the cave, it was locked. Our local guide, in person a local climber, could not be stopped by the gate and started to use the not official way next to the gate. Powerful upset he had been at the entrance already: what waste of taxpayer money in the development of the cave system with roads and lift and then closed to tourist during main season! He is right.

We followed him with somewhat uneasy feeling, but eventually we did not want to go without a few pictures at least. Lo and behold, a huge cavern whose main area measures about 500 m². Scientists suspect that the limestone cave Theopetra ("Divine stone") had been used during the Late Cretaceous period already, about 137 - 60 million years ago. Clear and due to detected artefacts is, that the cave was already inhabited 50,000 years ago. In the cave there is the oldest man-made ever built wall in the world, at least in regards to so far knowledge of archaeologists. It is a stone wall that closes off two-thirds of the entrance of the cave. It was built 23,000 years ago, probably as a barrier against the cold wind and protection too. All statements inside the cave are also available in English, so that people's lives can be traced well.

We gladly would even risen into detailed consideration and portrayal in the cave, which was not possible, however, because of the strong bars. When an opening is carried out again, is not yet known. At least, here are some first impressions.

For all climbers and outdoor activists should also be mentioned that there are even well executed and secured climbing routes above the cave.

Along the Pindos Mountains to fascinating Meteora