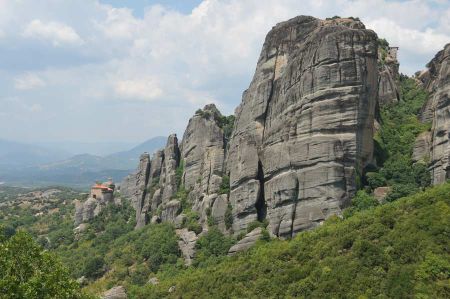 In Greek mythology, in addition to Mount Olympus, the Pindos is known as the residence of the gods, here as one of the places where the Muses are said to have gathered around Apollo.

The name of the high mountain range means "whiteness" and goes back to "white" or "wheat" to a common Indo-European root. On our way along Roman roads we were on the way to Meteora, so we first passed the spectacular mountain range from the modern Via Egnatia, which of course is part wise leaving the old Roman Road.

Pindos is the name of a high mountain range, which extends over more than 150 kilometers along the border with Albania in north-south direction and dividing the Greek landscape Epirus into western Macedonia and Thessaly to the east. In the north, the Pindos even extends into Albania. In the southeast of the Pindos, it continues into Agrafa Mountains. The Pindos is the watershed between the Ionian Sea and the Aegean Sea.

The Smolikas with its 2.632 meters of height, is the highest peak and making it the second highest mountain in Greece after Olympus, with no fewer than stately 2.917 meters. Smolikas, like the massifs Grammos, Tymfi, Smolikas and Mitsikeli belong to the northern Pindos. In the southern Pindos you will get into the Lakmos peaks and the Tymfristos being used for skiing.

Famous for Pindos Mountains is the Vikos Gorge, about which we will report in a more detailed article later. The Vikos-Aoos National Park in the northwest and the Pindos National Park in Western Macedonia are of great interest for hikers. East of the Pindos, the Meteora monasteries are mainly of tourist interest, which can also be perfect for hikers. About hiking at Meteora, there will be a separate article too.

The National Road 20 passes south of the border with Albania to Pindos. The National Road 38 in southern Pindos was completed at the beginning of the 21st century together with the 1.300 meters long Tymfristos tunnel, which makes the crossing of a 1,200 meter high pass road unnecessary. The major highway 2, which connects Igoumenitsa with Thessaloniki, runs from west to east through many complex engineering road structures passing the mountains. Once in Meteora, the monasteries Metamorphosis, Varlaám, Rousanou, Agia Triada, Agios Stefanos and Agios Nikolaos Anapavsás are still inhabited and can also be visited. Each of the monasteries have a day off on another day, so that never all monasteries are closed simultaneously.

Important: Note the dress code for visitors. For men basically taboo is wearing Shorts (exceptions prove the rule), while miniskirts will not be tolerated at women and sleeveless tops sometimes too. Pants wearing women will be asked in some monasteries to add a skirt which can be borrowed at the entrance.

Climbing to the uninhabited and dilapidated monastery ruins is difficult, often dangerous and is not recommended. The rocks of Meteora are among the most popular climbing destinations in Greece. For the first developed and traced climbing routes in the territory, the German Dietrich Hasse is mainly responsible, which has as well written guidebooks to trails and climbing routes in Meteora. Hasse, who origins from Bad Schandau in Saxony, was counted as one of the best climbers in the Elbsandsteingebirge in the 1950's. Among his most famous first ascents in the sächsische Schweiz (Saxon Switzerland) climbing region there is the  Thalweg in the Höllenschlucht, the west ridge at Falkenstein and the Rudolf Fehrmann memory lane on Bloßstock. In 1955 he left the GDR and moved to West Berlin, later to southern Germany. After studying geography, politics and biology at Freiberg and the University of Berlin, he worked as a school teacher at secondary schools in Stuttgart and Munich.

Dietrich Hasse´s international breakthrough appears when he found the first ascent of the north face Direttissima, the Cima Grande in the Sexten Dolomites in 1958. He repeated numerous extreme routes and carried out more first ascents such as west wall of Rotwand in the Rosengarten together with Lothar Brandler. Hasse also participated in some non-European expeditions, such into Hindu Kush as 1960, later, in 1969 into the Andes and in 1971/72 the Hoggar mountains in the Sahara. From 1975 he went again to the famous Meteora rocks, which he developed further more for climbers again. 2001 the Base-Jumper Felix Baumgartner jumped from 120 meters high rock at one of the Meteora peaks.

There are several caves in the formations of the Meteora rocks. Worth mentioning in particular is the Theopetra Cave. It is the oldest man-made structure in the world at this cave. It is a stone wall that closes off two-thirds of the entrance of the cave. It was built 23,000 years ago, probably as a barrier against the cold and wind.

Meteora Monasteries in the spectacular side of Kalabaka