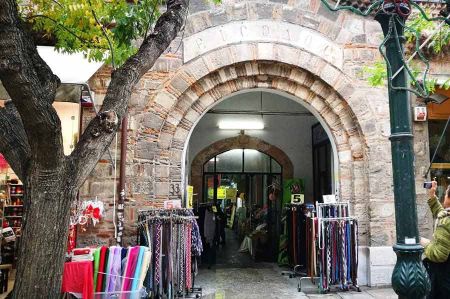 Once more we had set out on a tour of Thessalonica, had chosen the way along the city wall up to the fortress gates with acquaintances, had gone en route into a small cafe offering fresh, home-baked cakes and were then, after the passage of the Agora and the source sanctuary, walking along Via Egnatia into the city center. 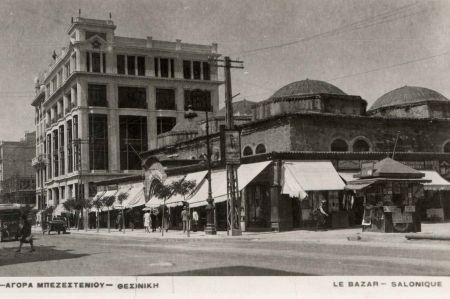 We were fascinated by the facade of a very oriental-looking building, as the domes with their lead roofs pointed to a Bedesten, an Ottoman market for haberdashery and craft. Bezistans or Bedesten were built throughout the Ottoman Empire and their basic design is based on that of the mosques, it is the central building of the commercial part of many cities. It has its origins in the Greco-Roman Basilica, which served a similar purpose, but were architecturally different. Bedesten was such an important building that cities were often divided into two categories during the Ottoman period: cities with Bedesten and cities without Bedesten.

The Bedesten of Thessalonica is today not only an Ottoman monument, which was built during the reign of Sultan Mehmed II (1455-1495), but is still used as a market hall. Bedesten is located in Thessalonica at the intersection of Venizelou and Solomou streets.

Columns and domes show the architecture 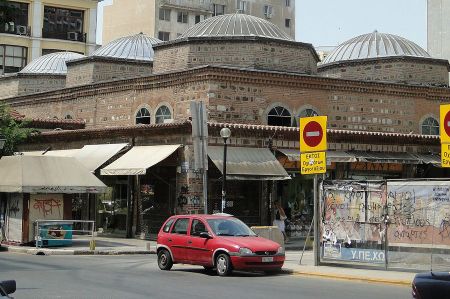 The word Bedesten is derived from the Turkish word "Bezesten", which means "antique business", and from the Arabic word "bez", meaning "substance". The Bedesten in Thessalonica consists of a rectangular room with an entrance in each of the four sides. The interior is divided into six quadrilaterals with seven double arches based on two main pillars. The building has six domes covered with lead.

Tour under the domes of Bedesten

Before the fire of 1917, which destroyed most of the city, the Bedesten of Thessalonica counted 113 shops. After the fire around the central square more shops were added. In the 1980s and 1990s, work was underway to secure the foundation of the building. Even today, the Bedesten of Thessalonica houses various shops, in the rear right corner there is even a staircase that leads up to a metal trail above the shops and thus allows a view of the construction of the support structures and the domes of brick bricks.

A worthwhile destination during the city tour.