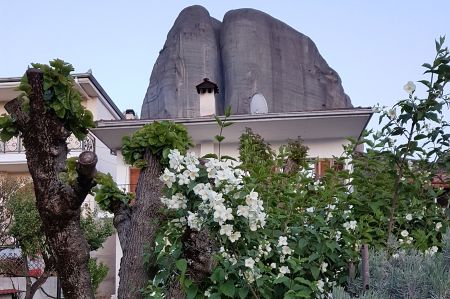 After our arrival in Kastraki was still time for a small tour into the village, where we admired the blossoms of wild flowers but also in some of the gardens.

The flora or plant life of the village of Kastraki showed a truly colorful range of plant species of the region, which would certainly be worth a systematic description in its entirety. By the way, the name Flora is derived from the Latin name Flora, in the Roman mythology the goddess of the flower, in particular the cereal blossom.

Their veneration was to have been introduced into Rome by the Sabine king Titus Tatius; According to others, Numa Pompilius should have used a Flemish Floralis for her. At their feast (Floralia) the apartments were decorated with flowers, the women dressed in colorful colors contrary to the custom, and singing, dancing, and table pleasures filled the feast. After the First Punic War, the games of the flora were also held in the circus, the ludi florales, which took place from 28 April to 3 May, during which the so-called "deer", ie hares, deer, etc., were killed instead of wild beasts.

Flora had two temples in Rome, one on the Quirinal, the other near Circus Maximus. The artists portrayed the flora of a Greek spring-like scene as a flowering, flower-bedecked virgin. Among the plastic representations, the so-called Farnesian flora is the most famous, a survival-size marble figure, which is now in the National Archaeological Museum of Naples.

In Ovid, she is equated with the otherwise unoccupied Greek nymph of Chloris: "And while she spoke, she breathed spring roses out of her mouth: Chloris was called Flora."

We were very impressed, especially since the buildings were very harmoniously integrated into the overall picture of the lovely village of Kastraki.

Meteora - Hikes between the towering rocks

The Theopatra Cave next to the Meteora Monasteries