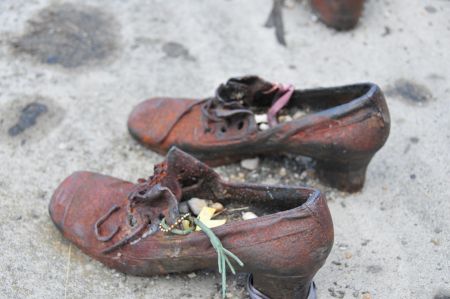 From a distance we had noticed some crowds of visitors who had gathered on the eastern bank of the Danube, not far from the Hungarian parliament building, whose focus was clearly visible on the ground: metallic shoes were fixed here.

First glance at an explanatory table described the shoes as a memorial of Gyula Pauer and Can Togay in memory of the pogroms of Jews by Arrow Crosses in Hungary during the Second World War. Arrow Crossers or Hungarians were the supporters of a fascist and anti-Semitic party in Hungary from 1935 to 1945  under various names. Their party leader was Ferenc Szálasi. With the support of the Third Reich, the Arrow Crossers built a fascist collaboration government between 16 October 1944 and 28 March 1945 in parts of Hungary, which had not yet been occupied by the Red Army, they murdered several thousands of people.

The pairs of shoes (Hungarian Cipők a Duna-parton) are located on the Pest side of the Danube, at the end of Széchenyis Street about 300 meters south of the Parliament building, close to the Academy of Sciences directly on the Danube. On a length of 40 meters, sixty pairs of shoes made of metal and fixed on the ground to commemorate the shooting of 1944 and 1945, when Arrow Crossers had driven Jewish Hungarians on the banks of the Danube and then shot them. The Hungarian historian Krisztián Ungváry speaks of 2,600 to 3,600 victims who have been murdered in this way. The shoes stand or lay "as if by chance" after the deeds. The Holocaust Memorial was designed in 2005 so that at first sight it does not reveal what is behind it.

The founder of the modern Hungarian pharmaceutical industry, Gedeon Richter, who was murdered there on 30 December 1944, was responsible for the victims. The inscription on the memorial plates in the languages Hungarian, English and Hebrew is "In memory of the victims who were shot into the Danube by armed Arrow Cruisers in 1944/45".

In contrast to the memorial for the murdered Jews of Hungary at the Great Synagogue, the Danube is a rather quiet remembrance.

The memorial also indirectly recalls the rescue activities of other Hungarians, such as Károly Szabó, an employee of the Swedish Embassy, who, together with about 20 unknown police officers from the Swedish Embassies were attacking Arrow Crosses to stop them shooting  Jews with bare bayonets. And then helped them to escape too. Reports of the Jakobovits family in 1947: "When the rescue came at the last minute, we stood face to face with the water on the banks of the Danube."

Lajos Stöckler and his eight-headed family Jacobovits, Edith and Lars Ernster, Jacob Steiner, Eva Löw and Anna Klaber were among the 154 saved. Jacob Steiner's father had been shot on the banks of the Danube on 25 December 1944.

Quote in the book "Dreams and Tears: Chronicle of a Life" (2006) by Dr. Erwin K. Koranyi on the rescue on the banks of the Danube: "The police has directed their weapons to the Arrow Crossers and a present police officer was Pál Szalai, who had co - operated with Raoul Wallenberg, another one was Károly Szabó." In 1963, Raoul Wallenberg was awarded the Nobel Prize for Best Honors, Pál Szalai received this award in 2008  on 7 April 2009.

Walk across the Margareten Island of Budapest

Budavari Siklo - cable car to the castle mountain of Budapest