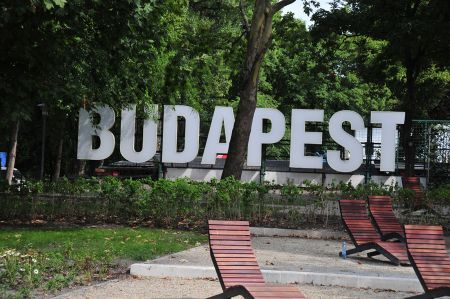 Our tour through Budapest also brought us to Margareten Island, the famous Danube Island in the center of the Hungarian capital Budapest, which is situated between the two municipalities of Buda and Pest.

The island has a length of about 2.5 km, an area of 0.965 km² and is known for its attractive offers for tourists as well as for the people of Budapest. In the Hungarian language, the island is called Margit-sziget, which brings us to the naming.

With the original name "Rabbit Island" (in Hungarian: Nyulak szigete) the always changing history of the city island began. In the Middle Ages King Béla IV of Hungary promised in the event of a victory over the Tartars to send his daughter Margareten as a nun to the Dominican convent, owners of the island at the time. After the victory of the Hungarians, King Béla IV kept his promise. His daughter, however, died at the age of 28 and was beatified in 1276. Through numerous legends around the royal daughter Margareten, the island finally got its name.

With the bus line 291 we drove from the campsite almost close to the Margareten Island, then had first chosen the way to the castle mountain, then to visit the Danube Island. The individual cultural highlights in Budapest are so close together that one can walk on foot very well, which is the only option of traveling on the Danube Island, except taxis, buses and the so-called bringóhintó, the rickshaw-like bicycles, all other vehicles on the island are prohibited.

It is said that the Turks used the island before the end of the 18th century for their harems women. However, the Turks were expelled from the country in 1686. At the end of the 18th century, the island belonged to the Austrian Palatins, which made this place a recreational and health resort. The exploitation of thermal springs in the second half of the 19th century emphasized the recreational purpose even more. With the completion of the Margareten Bridge in 1900, the small island ("painter island") was connected to the south-west with the main island. The result was today's expansion. The city acquired the area in 1908, but demanded entrance fees for entry until 1945, in order to maintain exclusivity. Since then you can visit the island for free.

Especially in the 1980s, young people from the GDR, who hitched their way through the Eastern Bloc, used the island's greenery for illegal overnight stays. This had primarily financial reasons, because the campgrounds were hardly affordable for GDR citizens with the limited exchange budget. In addition, the GDR tramps were among themselves. Toward the end of the 1980s, the Budapest police tolerated this phenomenon less and less and directed the young people almost every night off the island. As an alternative, in an industrial area on the eastern outskirts, an area had been provided for free camping.

The most striking point in the south of the Margaret Island is the centenary monument (in Hungarian: Centenáriumi emlékmű) of István Kiss, which commemorates the union of the three cities of Buda, Pest and Óbuda as the new city of Budapest in 1873. In the middle of the island are large park areas, which have been laid out in the English style, on the east side are the remains of a Franciscan monastery from the 13th century. To the north of the monastery ruins is a central rose garden with more than 2.500 different types of roses.

Further north are the "ruins" of the Dominican convent, in the meantime, where the King's daughter Margarete lived. During excavations in the 19th century the tomb of the Hungarian King Stephen V was found here with a precious crown. Also at this point the promenade begins with numerous busts of important writers, artists and architects. Near the Dominican convent stands the St. Michaelis Chapel, part of the Premonstratensian monastery from the 12th century. It probably owns the oldest church bell in Hungary from the 15th century.
On the Margareten Island is the Danubius Thermal Hotel Margitsziget, which was built on the foundation walls of the former Margareten Bath, a complex of thermal springs, which we will discuss later.

Budavari Siklo - cable car to the Castle Mountain of Budapest

The chairlift to Zugligeti - at the entry of the campsite