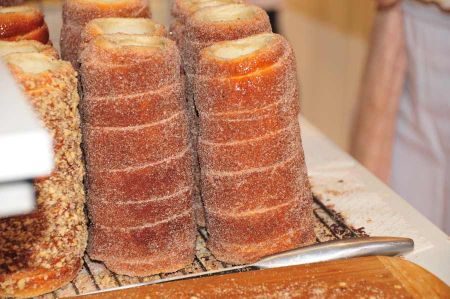 Whoever had brought the still warm and deliciously fragrant cake with the almost unspeakable name Kürtöskalács to the booth of Frankana, it was definitely delicious, no question, as we quickly agreed.

The visit to the partner stand of Hungary was later to quickly unlock the secret, because Kürtöskalács is a very special traditional pastry, which derives its name from its tube-like shape, because "kürtös" means horn in Hungarian and "kalács" is the word for a pastry. For the typical Hungarian Kürtöskalács, a sweet yeast dough is wrapped around mostly wooden rolls, which are then baked over open charcoal fire. Add to that mostly sugar and some other ingredients such as walnuts. In the meantime, Kürtöskalács has become indispensable for folk festivals and Christmas markets in Hungary. Let us first look back at its history and origins.

The history of the Hungarian Kürtöskalács 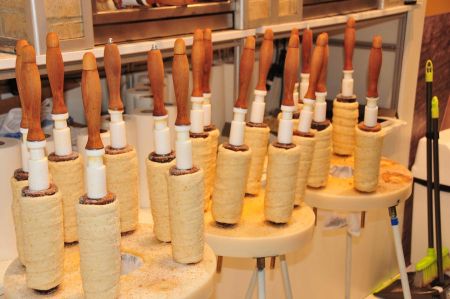 One of the first important and official recipes is the entry in the recipe book of the Countess Mária Mikes Zabolai from the year 1784. At the end of the 18th century, this pastry became popular throughout the Hungarian-speaking world. It was prepared especially for parties and weddings. Its beginnings, however, go much further back. The first evidence of similar baking methods was already mentioned in 1450 in a manuscript in Heidelberg. The development towards today's form took place mainly in Transylvania (Transylvania) in today's Romania. In the past, corn cobs were sometimes used instead of the wooden rolls to wind up the dough. And in Transylvania the Kürtöskalács is often even bigger.

For Kürtöskalács there are many different names in different languages that are sometimes used interchangeably, but do not always refer to the same thing: Kürtöskalács, Trdelnik, Baumstriezel, Baumkuchen, Prügelkrapfen and many more. But you better stay with the original name. Why, we try to explain based on the differences.

From the Kürtöskalács the Czech-Slovak developed Trdelnik 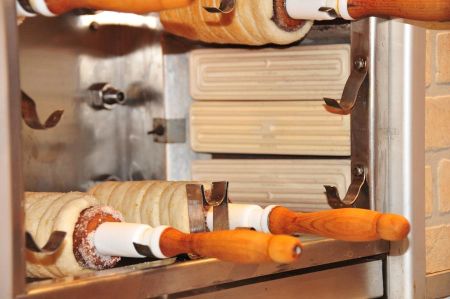 Already in the 16th century people began to distinguish three different directions of development. Once there was the yeast dough, which was wrapped in a strip around a wooden roll. From this the Kürtöskalács developed as well as the Czech-Slovak Trdelnik. In this respect, both are very closely related. The second direction includes various variants of a relatively liquid dough. These include Ragoulis, Šakotis and Gâteau à la broche in Lithuania and France. In Poland, a similar pastry is called Sękacz and in Sweden Spettekaka.

The third direction is derived from the Transylvanian Saxons Baumstriezel.

In this respect, Kürtöskalács should not be simply translated as a tree trellis, because the former form comes more from the Eastern Transylvania from the Hungarian minority of Székler, while the Baumstriezel rather goes back to the Transylvanian Saxons. Incidentally, the very early forms were not coated with sugar before baking. It is not until 1876 that the recipes are proven, which sprinkle the Kürtöskalács with sugar before they are baked, so that today's typical caramel crust is created. 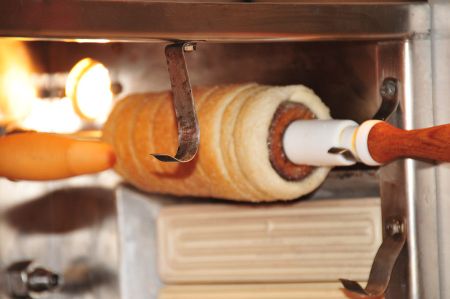 At the end of the 18th century, the Hungarian general, poet and count Jószef Gvadányi came to Szakolca (today's Skalica in Slovakia) and lived there from 1783-1801. His cook from Transylvania brought the recipe of Kürtöskalács. This resulted in Skalica in Slovakia, the Trdelnik (currently only in Slovak). Since 2007, this name has been protected in Europe. Also in the Czech Republic, the pastry has spread quickly and is very popular in Prague, for example. We were able to try the Trdelnik true to the original in the European Capital of Culture 2015, in Plzen.

Kürtöskalács attains the rank of a cultural asset

The Kürtöskalács (pronounced Kürtöschkalatsch) recently received his accolade on 3 December 2015, because it was officially awarded the title Hungarikum by a Hungarian body. Thus, the Kürtöskalács rises in the rank of a cultural asset and national cultural heritage and thus the cake is in prominent society with, for example, the famous salami or porcelain from Herend.