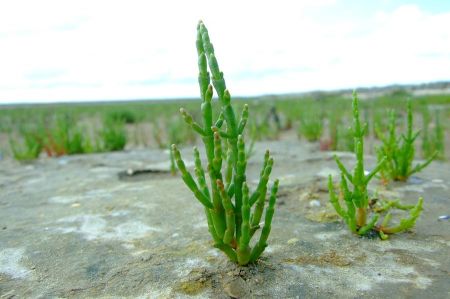 Years ago, we first came across the Salsola salad when we were presented a selection of meze dishes (starters) in a seafood restaurant at Cesme, including the Salsola, which is called saltwort or glasswort as well.

Curious about the appearance and taste, we asked the waiter for the origin and name of the plant and ordered a extra portion of Salsola salad, which was blanched in this restaurant and served with a little olive oil.

The swelling plant can regulate the salt concentration

Our well-informed waiter answered our questions about the origin of the plant with a brief ecological description of the origin as a salt marsh plant, which is not viable without the daily intake of salt. This is the reason why the swell mostly grows on sandy, wadden-like beaches, which are flooded several times a day due to the tide. The swelling plant is able to store salt ions from the soil inside the plant, thus overcoming the osmotic suction power of the salty soil and absorbing nutrient-containing water. By the time, the salt content in the plant is getting larger, so that the source absorbs additional water to compensate to regulate the salt concentration. Even this kind of salt balance can only help for a few months, so that after just six months the plant swells due to hyper salinity.

The salsola belongs to the group of halophytes, the annual, tribe succulent salt plants, that usually stems lying flat to ascending, single to multiple branches, on the flooded sandy salt marshes of many coasts, especially in northern Europe and therefore often referred to as Fries weed. The young swamp plants are fleshy to nodular, while older plants can be quite woody. Here already is a serious difference in the preparation of the salad, as just young sources should be used. Although usually quite salty in taste, the salsola is quite tasty and depending on the place of origin also quite healthy, as it contains a variety of minerals. The name is very different in the countries of origin and does not always indicate the source of the swelling. The name of the source in Dutch is "Zeekraal" and is even distributed in supermarkets. Here it is usually raw or briefly sautéed and dressed with vinegar and oil, served as a side dish to fish.

Salsola vegetation on the North and Baltic Sea, but also on lakes

In addition to the salty wadden shores of the North Sea and Baltic Sea, the spring is now also found on salty lakes in the inlands, including in Turkey. In principle, wet to wet locations on silt or sand, which are often flooded by the tides, are important. Despite numerous attempts to cultivate the swelling in large plantations, so far all attempts have failed, since the temporary over-rinsing by tides, the high water saturation of the soil and the high salt content are hardly to imitate artificial. Thus, the salsola is still a pure natural product, which is also used by barnacle goose and ringed goose as a source of food.

Swelling plants as first settlers of the mudflats

As a so-called first settlers the swelling plants offer an important potential also in the coastal protection, because through their roots they hold the once washed up sand of the mudflats. The genus name Salicornia comes from the Latin and already includes a main component of the plant, the Sal, from "salis", the salt. Another German name of the plant is glass melt, as the ash of the plant is used for preparation of soda, which is of great importance in the fusion of glass. The content in the plant is about 15% soda.

Still unfamiliar application of the source

So we tried our blanched salsola, which is called Deniz Börülcesi in Turkish, were initially a bit irritated because of the high salt content but then convinced in the taste. When our fish dish was brought, the combination was perfect. The fish is often served unsalted, since mostly grilled on charcoal, many Turks prefer to salt themselves. Instead of the salt from the spreader we used our Deniz Börülcesi as a salt source, which together with the fish forked an excellent taste. Later, we also tried the slightly fried Deniz Börülcesi, also a flavorful alternative.

Tartar of tuna on the broth:
Finely chop the tuna, finely chop the whites of the spring onion, finely chop the chili. Mix well with mango balm, olive oil, truffle oil, salt, pepper, chili and sugar and leave for at least 1 hour.
Add argan oil, sherry vinegar, salt and pepper on your taste.
To serve:
Put some of the marinated saltwater in matching spoons or on a small plate. Cut off a cam from the tartar and decorate with 2 almonds.

Deniz Börülcesi salad
1 750 g of swelling plants
2 3 medium clove garlic (s)
3 lemon (s)
4 tsp, heaped pepper black
5 0,1 liter of olive oil
6 2 cubes of bouillon
7 2 liters of water
Free the swelling of thick branches. Only the young tender shoots are taken. The rest is woody. Wash the source with cold water and free from any sand.
Bring water to a boil. Dissolve bouillon cubes in it. Blanch the quark in it for about 2 minutes. Drain through a sieve and place in a bowl. Press the garlic cloves over and mix. 5 min. to let go. Squeeze out the lemon and pour it over. Add the pepper and mix well with the olive oil.
Let it be in the fridge for about 2 - 3 hours.

Tip:
If you want, give some yoghurt just before serving.
Good as a side dish to grilled fish, but also to lamb. Often as part of a cold appetizer plate (mezze).
Please read as well: