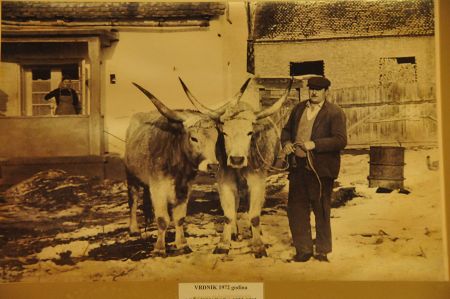 Serbia only is about five times the size of the German state of Schleswig-Holstein, but different vegetation zones, animal worlds and cultures meet in this country. Many Serbs still live in a deeply connected relationship with their own nature.

They are proud of the many stork nests in their villages, they are intensively concerned about the preservation of old livestock breeds and the resettlement of vultures, to name just a few samples. Even bears, lynxes and wolves are welcome in many places. Also some jackals are back home in Serbia's forests.

The traditional so-called Puszta beef or even prairie ox was only found in a few places in Serbia anymore, one more reason for Jovane to work on breeding this rare species within the scope of work and employment around the nature reserve Zasavica, next to the camp of the same name. These cattle are still connected to the Maremman cattle, an original house-barn which is reared in the grassy ridges of the Maremma in southern Tuscany and northern Lazio, along the coastal strip of the province of Grosseto and the province of Viterbo. The original lines of the Maremmana even show some characteristics of the extinct Aurochs, the wild form of domestic cattle.

In the restaurant belonging to the natural park some interesting pictures of cattle, which were once the pride of their owners and were also used as cartridges for carts and as fieldwork bulls are shown.

The cattle were especially suited for rearing in the wetlands, which often had been contaminated with malaria, so as to settle in the marshes along the rivers. The particularly long-horned animals, whose horns can reach up to 100 cm in length, often have a grey coat. Since the cattle feed on wild grasses, their flesh is considered particularly tasty. Genetically the cattle are related to the Hungarian cattle from the Hungarian Puszta. Some of Maremmana's breeding lines combine more Aurochs characteristics than others. The particularly original cattle is summarized as "Maremmana primitivo" (primitivo from Italian originally).

Because of their originality, Maremmana primitivos are used in the TaurOs Project, which aims at breeding with original, aurochs-like breeds such as Pajuna, Sayaguesa, Tudanca and others, which is phenotypically, ecologically and genotypically as close to Aurochs as possible. These species carry somewhat less influence of the puzta cattle in itself. Thus the horns are much thicker, but curved upwards. The color of the bulls varies from very dark to black with a white streak, while the cows are light gray to white.

Maremmana primitivo therefore have mostly the color dimorphism of the Aurochs, even if their fur color is substantially grey. Both sexes have the brightly furrowed muzzle of the Aurochs as well as curly forehead hair. It is usually about high-legged and tall-grown cattle, the cops reach up to 170 cm shoulder height. In addition, the bulls have a curved back line, which is due to the well-developed shoulder and neck muscles. With only a few cattle races, this Aurochs feature is distinctive, such as the Spanish bulls or Sayaguesa.

If there is a possibility of an intermediate stop on your route between Zagreb and Belgrade, just go to the Zasavica Nature Park, which also offers parking spaces for overnight accommodation all year round. A hike along the banks of the river Save is leading you directly into nature.

Sremska Mitrovica from the perspective of an architect