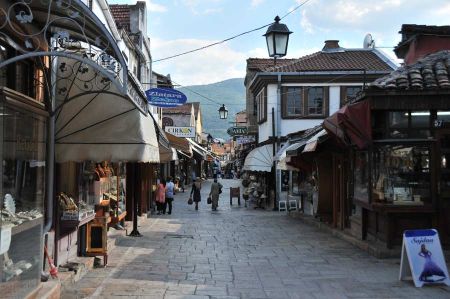 When in 518 an earthquake destroyed the entire city of Skopje, it was a primary concern of ruling Emperor Justinian I to rebuild the city. Not even a hundred years had passed when, in the winter of 594/95, the Slavic tribes of the Balkans, the tribes of the Slavs, destroyed the city again.

The Middle Ages between the invasion of the Slavs until the Ottoman conquest in the 14th century were marked by bloody struggles between regional powers, especially the Byzantines and Bulgarians took place in them. In the 9th century, the Bulgarians later forced the city into the First Bulgarian Empire and could keep them for several decades. Through the Christianization of Bulgaria, Skopje became seat of a bishop.

In the year 1004, a large battle between Byzantines and Bulgarians took place in the surrounding of Skopje. After the fall of the First Bulgarian Empire in 1018, the Byzantines conquered the city again and declared it to be the capital of the Byzantine theme Bulgaria. The ruler ship of Byzantium, however, did not last long and led to the strengthening of the local Boljaren. As early as in the 12th century the Bulgarians, after an uprising, were able to recapture Skopje and annex it into their Second Kingdom. In 1282 the Serbian King Nemanjid Milutin snatched the city from the Bulgarians. Skopje developed into the new residence of the Serbian dynasties. On April 16, 1346, King Stefan Uroš IV. Dušan and his wife were crowned by the Bulgarian patriarch Simeon and Archbishop Nikolay of Ohrid in Skopje as the Czar and Tsarits of the Serbs.

The Ottoman Empire emerged from the remnants of the Sultanate of Rum-Seljuks, and for several centuries it was the decisive power in Asia Minor, the Middle East, the Balkans, North Africa and the Crimea. Within Sultan's Orhan Gazi's lifetime the expansion to Europe by crossing the Marmara Sea began, 1354 the first city, with Gallipoli (Gelibolu), on European soil was conquered. In 1361, Adrianopel, the second-largest Byzantine city, succeeded in attacking Macedonia (1371) and Bulgaria (1385 and 1396) after the Battle of the Maritsa (1371). In 1389, Murad I succeeded in defeating the allied Christian princes of Serbia and Bosnia and probably other allied Christian principalities in the Battle of the Amselfeld.

Allover in Asia Minor, both by war and by marriage, the European part of the Ottoman Empire had become more important. From 1385 onwards, the military leadership was given over to a "Beylerbey of Rumelien" (the European part of the Ottoman Empire) and a "Beylerbey of Anatolia", the former having the supreme command.
Beginning at January 19, 1392, Skopje was under Ottoman rule for more than 500 years. Beside some mosques it is especially the old bazaar, which reminds of the Ottoman time. You will find some pictures in the picture gallery.

The continuous development of Skopje was abruptly interrupted when Austro-Hungarian troops under General Enea Silvio Piccolomini advanced to Macedonia in the Great Turkish War (1683-1699). On October 25, 1689, his army took the city without great struggles because the Ottoman armed forces and many inhabitants had already left the town. Piccolomini ordered to burn down Skopje on 26 and 27 October. Supposedly, the spread of cholera should be prevented. The fire destroyed many houses and shops. The Jewish quarter was hit hardest. Most of the houses, two synagogues and the Jewish school were destroyed by the fire.

The city slowly recovered from the fire. The hundred years of the history of Skopje, following this destruction in 1689, are largely in the dark. A few isolated sources report of the repair of the Sultan Murad II mosque, which was undertaken in 1712, 23 years after the fire. An Ottoman plan of the district around the mentioned mosque shows that by this time most of the buildings were destroyed. Travelers who visited Üsküb towards the end of the 18th or beginning of the 19th century reported about 5000 to 6000 inhabitants, about 40,000 to 60,000 inhabitants before the fire, and also about 1500 houses, which were quite small and lined next to dirty streets.

Skopje also came into the confusion of nationalism in the Balkans in the 19th century. In 1844, Albanians organized an uprising against the Ottoman Empire. They protested against the too high taxes imposed on them and the policy of centralization. After the breaking up of the insurrection many Albanian inhabitants were imprisoned or exiled to Asia Minor.

A further upswing began in the course of the 19th century, not at least due to the construction of railways, which had been pushed forward by the late Ottoman state, combined with the influx of non-Muslim population. From 1873, Skopje was connected to Thessalonica by a railway line along the Vardar River, and in 1888 by the Serbian railroad. From then on the city was directly connected with Central Europe via Belgrade. In the 1890s, connections to Bitola and Istanbul followed. Skopje was the main town of a sand-shack, and from 1888 (replacing Priština) capital of the Ottoman province (Vilâyet) Kosovo. During this time, Skopje became the third largest city in Macedonia after Thessalonica and Bitola. Thus, around the turn of the century to the 20th century, Skopje had a population of 30,000 to 40,000, primarily as a result of the arrival of Slavic Christians from the peasant surroundings, which once again gave the city a non-Muslim population majority for the first time since the 15th century.

Skopje - excursion through the capital of Macedonia