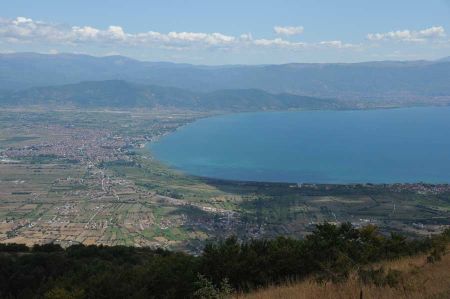 Within the framework of our project "A journey of Intimacy and Culture along the Roman Roads", we want to explore possible Outdoor activities in different places to support local development structures by reporting online and to develop sustainable tourism in order to support the local community.

We mainly engaged us with hiking or walking routes near and along the Ohrid Lake in recent days, so now our focus is on paragliding, especially the Take-off possibilities.
Every now and then, during our stay in Kalista, we saw one or the other paraglider above the lake from campsite Rino, first explorations had caught up with regards to possible launch sites and were then, during a first exploring, again surprised how well developed the local possibilities for paragliding actually are.

For the purpose of exploring, we had set out from Struga on the road towards Visni where we were surprised on signs for a Take-Off for paragliders. We followed the signs made of wood that led us in the direction of the first summit Tri Silka (1,950 meters) towards the Albanian border. After about two kilometers on a paved forest road then along a really buckled forest way, but again well signposted, we followed almost parallel to the mountain range and Lake Ohrid towards border crossing at Kafasan. After about two more kilometers we reached the ruins of a former building of the border guards, which was situated on a plateau in front of us. After exploring closer we could, on the opposite mountains, recognize the deserted border posts on the Albanian side.

The further exploration of the surrounding areas showed a well-designed runway, but probably again been overgrown with tall grass due to lack of use, which the paragliders would not likely to really disturb. The runway is long enough to even inexperienced pilots to offer good opportunities for Take-Off, and the adjoining forest was much deeper that the pilot could easily fly over it, as the images convey impressively well. The opening view over Lake Ohrid is really impressive, as well as on the level between Struga and Ohrid, where the landing site is located.

Up here on the plateau and parallel to the starting point / Take-Off, the trail for the mountain bikers passes the area. Again, there are excellent signs, so that is easy to follow even the way to the border crossing. We will invite some pilots to further explore the possibilities for flying and weather conditions in order to prepare a possible Paraglider meeting in May of next year. First, it applies, however, to explore the starting area on the opposite side of the Ohrid Lake, what we have planned for the next few days.