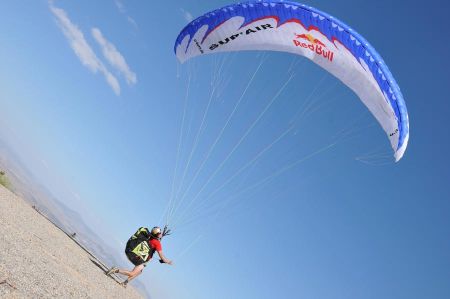 Pal Takats is among the most skilled acro pilots ever. The young Hungarian pilot is a real paragliding and acro zealot – in a positive way. Please read what he is telling about himself:

„I was born in 1985 in Budapest. I did many sports when I was child, like fencing, roller-skating, skateboarding, snowboarding and later some more near-natural sports like caving, rock-, and mountain climbing. During these years when I was walking in the city sometimes I saw a lot of paragliders in the air at a local take-off site in Budapest and I started to become interested about flying. A few years later, when I was 16 I did the basics course (end of 2001), but because I was still studying and I had no money for the equipment I flew only around 25 hours in the following 2 years. When I finished the school, I went to work as a highscaler to clean windows on sky scrapers and earn money to buy new gear and fly every day I could. Flying effaced all the other sports right from the beginning and it even became a passion quickly. Soon I felt I needed something more than most of the pilots, that’s why my attention turned to acro in the winter of 2003, when I also met with Gábor. This way of flying opened new dimensions, which were totally unknown for me before. Next year I acquired the tandem and paragliding instructor licenses. That year I learned how to do most of the acro manoeuvres safely and D-bag jumping. In 2005, for the first time we took part in the competitions of the FAI World Aerobatics Tour. It was also the first time when we met with all the top acro pilots who helped us a lot to progress and gave a huge impulse to continue competing in the next years...

Gabor Kezi and me have choosen U-Turn to get the best possible technical support to achieve nice results and reach our goals. Without doubt we have the most expert designer of acro wings behind us and by working together with Ernst Strobl we can be sure that we get the right tools that really fit our needs and for sure, bring smile to all pilot's faces who try it.
Pál Takáts and Gábor Kézi have succeeded in their attempts to perform the Infinite Tumble on a U-Turn tandem paraglider over Walensee, Switzerland on Saturday 7 August 2010.
The stars of the award-winning acro film Adrenaline and Turbulence flew a specially built 31 m2 version of the U-Turn acro wing, the Thriller.
Billed as “probably the strongest paraglider ever built”, the wing has a reinforced inner structure and extra thick lines. The combined strength of the upper line cascades was calculated to be able to withstand a max. load of 8.2 tons and the main lines 5.2 tons.

Pal Takats and Gabor Kesi before performing the Infinite Tumble on a U-Turn Thriller paraglider
The need for U-Turn to build such a super-strengthened wing became apparent after the Hungarian duo’s earlier attempts to Infinite Tumble a tandem in Öludeniz had ended in disaster when an already highly-reinforced wing disintegrated after the third revolution breaking all the A,B,C and lines.
Pál Takáts piloted the U-Turn Thriller, but due to the extreme forces in play and high brake pressures needed to force the glider into and out of the Infinite Tumble it had to be controlled by both Pál and Gábor using a double brake system.
The team managed approx. 45 Infinite Tumbles in a row.