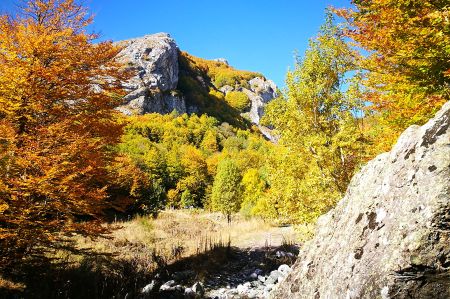 A further stop at Rino campsite in Kallista at the Ohrid Lake had led to visits to Vevčani, the curious "Republic" with its own passport and a carnival top address on the Balkans, but the wonderful autumn weather with plenty of sunshine had also led us to further mountain tours.

This time, our route was to explore the Jablanica Mountains, which is building the border between Macedonia and Albania.

The Jablanica mountain range stretches along the border in north-south direction northwest of Lake Ohrid to Debar. It is about 50 kilometers long and reaches mountain heights of more then 2000 meters, the highest mountain is the Black Stone (Macedonian Crn Kamen, Albanian Gur i Zi) with 2,257 meters, approximately in the center of the mountains. We had already made a few explorations from Vevčani, which we then reported in the blog.

This day we were going from Campsite Rino crossing the village Višni to Gorna Belica, from where there are two trails along the Jablanica mountain range, one towards the border crossing, which can also be used by mountain bikers, the other towards the Black Stone along three mountain lakes above Vevčani. Gorna Belica is located in the south-west of Macedonia at an altitude of 1.460 meters, about twelve kilometers northwest of the municipality of Struga. Gorna Belica in its character is more like a resort, as a mountain village grown during decades. This difference is due to the many holiday houses, which are booked in the winter by tourists from the region but also from other parts of the country. Gorna Belica can be reached via winding roads either from Vevčani, Oktisi or Višni. In the past, an aromatic minority lived in the village, but they have long been emigrated either to the lower Gorna Belica or to the neighboring town of Struga.

We pass through the village, which is now a narrow but paved road, then arrive on the gravel road to the fork of the road where there is also a small car park for the vehicle. From here we start the now well-marked hiking trail up to the Ezero lake, about 6 kilometers away, which should be a good 2 hours hiking.

Firstly through autumnally colorful torrential forests, it goes up from about 1,500 meters, more and more uphill, but not very steep, so that the normal hikers can follow the path. After leaving the deciduous forest zone between 1,600 and 1,700 of height, the view opens onto the surrounding mountain peaks and the path just below the summit, the formerly highly controlled border between Albania and Macedonia. Both states have a half-share of the mountains, which in the east falls to the valley of the Black Drin and the Ohrid Lake. In the west, on the other hand, the mountain range of Shebenik is almost equal. The Albanian side of the mountain range has been protected since 2008 as a national park together with the western mountain of Shebenik.

But now enough of words, please enjoy the pictures along the path at the Jablanica Mountains.

On the way to Tierra del Fuego - stopover at Lake Ohrid