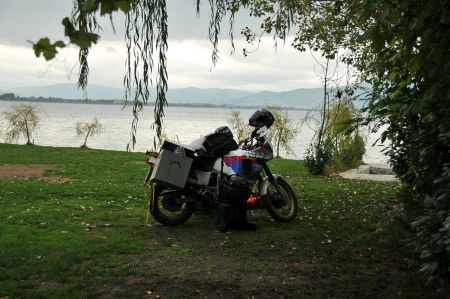 "Hey and hello, we are Luisa from Freiburg and Kevin from Emmendingen on the way to "Tierra del Fuego", so our two camping neighbors at Lake Ohrid presented themselves after their arrival on a Honda Africa Twin and fixing their tent while enjoying the obligatory welcome coffee and the associated "brandy" at Camping Rino.

In the summer of 2014, Luisa and Kevin got to know each other when Kevin was planning a trip around the world, for at least five years already a dream of Luisa It was beginning of 2015, when the two had then decided to begin this journey together. So it should then go through the Balkans to Thessaloniki on their own motorcycle and with their own equipment, which will then be sent back to Germany. In addition to the Honda Africa Twin they use a small tent, two sleeping bags, however, of good quality and just such mattresses to sparse equipment of the two world travelers, which are carried in two home-made aluminum cases on the motorcycle. A few more clothes to minimize other bells and whistles and the tour could begin.

From Thessaloniki, they should then first go by plane to India, where there are already contacts with local motorcyclists, which should help them buying a used Royal Enfield motorcycle. After that, long trips are planned by India and Nepal, after the end of the trips motorcycle should be sold again. After India it is the direction of Vietnam go where they will buy two smaller bikes which are to be purchased for the country exploring. These are just the first intermediate stations of the two travelers, whose long-term objective is, as stated, Tierra del Fuego.

We invited Luisa and Kevin for breakfast and so we discussed many other details of their tour, exchanged ideas, how great it is so far, that by internet made appointments and accommodations worked out well as positive experiences. Hospitable and helpful people are not as rare as you might think in many places. But you also have to be quite ready on the other side to give up the comfort and many amenities as well, if only in terms of the dependence on the weather. Nothing for people in fear of rain, who prefer retreat in the warm duvet.

Luisa and Kevin, however, we never did feel that they would not be aware of the forthcoming hardships and conditions, no unworldly dreamers. So many of their steps during the year were so far at least prepared, that certain directions were already known. Surprisingly for many may be that during a trip very often results in new ways happen which you really could not expect. At best we can only reiterate this point from our own experience.

Of course we would love the possibility to maintain the fresh contact, it may even expand. We will see. After some beautiful autumn days at Lake Ohrid everything today is gray in gray, light rain sets in as the two of them continued their way after breakfast. Following Meteora's next target Thessaloniki, from where motorcycle and pieces of equipment to be transported back to Germany.

Maybe we will meet again. Why not at Zampetas who has already served us a few times as a meeting point now. We will see!

To the Blog of Luisa and Kevin

Back at Lake Ohrid - Morning impressions at the lakeside

Excavation and Conservation works in Stobi