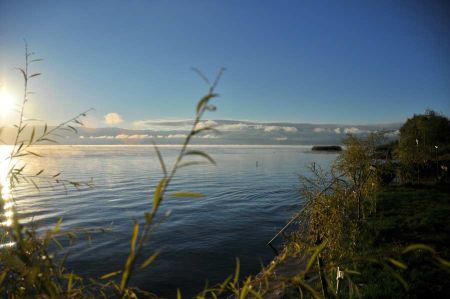 According to some rainy days, which unfortunately left our planned excursions on and next to Skadar Lake fell into the water, we are now swept back to Lake Ohrid, where during the week preliminary discussions relating to planned hikes and also in terms of a planned Paragliding Festival will take place.

We had chosen the route via Tirana, which has then subsequently prove a real problem. Many will now think that the roads that are provided here in Albania are to blame for any problems or missing or the little organized traffic in the capital, but far away from that. Many roads in Albania have been in such good condition that sometimes you rub your eyes and did not want to believe that you are in Albania. What, moreover, is also true for the campsite Lake Shkodra Resort, which gives an unbelievable impression with super clean and modern sanitary facilities.

No, it was just pleasure! The pleasure about the first qualification and participation in a European Championship in football in the coming year in France, which let people gather in their thousands in the capital. No wonder that literally the traffic collapsed in spite of thousands of fans even hundreds of policemen on duty, to keep the traffic flowing. Everywhere joy and flags, it was unbelievable. Thus, it went at a walking pace through the city, the main connections towards Elbasan were completely blocked because Boulevard Zugu should probably be place for the festival of joy. We had two guests "on board", which coming from Australia, were on the road to explore the Balkans. They had rented a room for a few days in the capital and were therefore full of anticipation of the huge festival in Tirana. We are curious to see if there will be feedback from them.

Of course, in this way our arrival at the Ohrid Lake had been delayed, but before nightfall caravan and equipment on Camping Rino were prepared again. After a delicious meal we went to bed early.

The next morning was once more to refer only with gorgeous: not a cloud in the sky high above the lake located at 600 meters above sea level. Just behind the mountains framing the lake there were clouds. The haze of the warm lake water still on rose, made small clouds that then went to direction of Albania, but then quickly disappeared with more expectant sunlight. There seemed to be a beautiful day, we wanted to use for another bike ride towards Struga. Here are some impressions of today´s morning.

Caravans and motorhomes - more diversity then ever