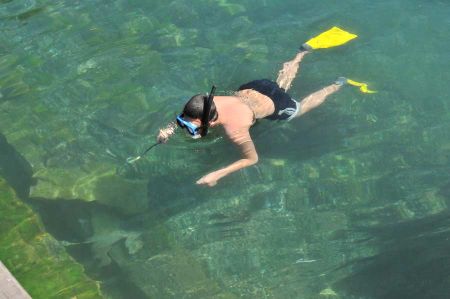 By bike we had traveled from the Campsite Rino into downtown Struga, had stopped at the bridge crossing the Black Drin to make a first walking tour through the city.

Our first walk along the river Black Drin was leading to the shore of the Ohrid Lake, which drains right passing the center of Struga. A second bridge, which is at the same time used to regulate the water level of Lake Ohrid, especially enticed us, because here the water shot with bold swirls out of Lake Ohrid. The dam construction and structure was simple and effective at the same time: strong, sloping wooden planks accumulated the water flowing out of the lake, the outflow amount was determined by the size of the opening.

We crossed the bridge and saw two boys in the water, equipped with diving goggles and flippers, scoured the bottom of the lake into the river shortly before the runoff. Language difficulties prevented any further information, so that we did not realize what were the two looking for on the lake floor. Perhaps due to the futile effort of seekers, both now turned to the strong flow of opening and were drawn from the flow below the bridge into the river. Certainly a great, if not entirely harmless recreational sports.

After a while of watching, we left the bridge and walked along the shore, which is used here as the marina and beach at the same time. To secure the bank a Mole was built into the lake, which was used by some boys to jumping into the lake. Again, they were enjoying the clear, fresh seawater. How long ago has it been that we could have so much fun swimming amidst a city in Western Europe.

Now we encountered an elderly gentleman because of its unusual headgear who had noticed us too: a felt hat, one otherwise encounters in Albania. A little similar too to the hats, worn by the dancers of the Mevlana in Konya in Turkey. Of course, we talked to him and almost fluent German came back, he, after been working 42 years in Germany and getting his retirement now wants to spend his life in Struga. Very friendly and open, he told us about his life. A little later we met again and the meeting was great, since he had now told other residents of his meeting with us.

We turned back to the Black Drin, this time on the other side of the river and so it was clear why the young water sports enthusiasts had fixed ropes with wooden cross beams on the bridge. They attacked the rope end with the wooden stick and settled on the water flow: massage in the Macedonian way.
Slowly, a feeling of hunger ceased and we turned back to downtown. But more about Struga t in the next article about cycling trip to Struga.

Culture region of Ohrid - the Museum on the Water