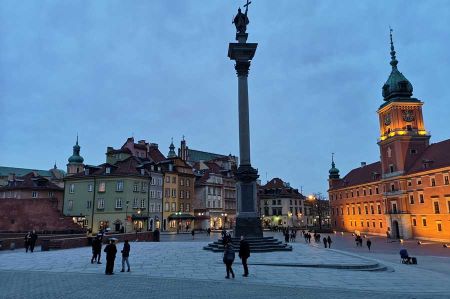 The Palace Square, in Poland called Plac Zamkowy, is located between the Warsaw Royal Castle and the old town. Viewed from the south, it was once bordered by the city wall and the Kraków Gate. The Sigismunds pillar has been the main attraction of the square since 1644. The Kraków Gate and part of the city wall were demolished in 1818, but the street, that started at the Kraków Gate - Krakowskie Przedmieście - kept its name. 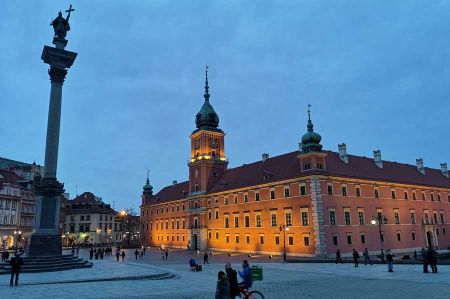 The Sigismunds pillar is one of the landmarks of the Polish capital, which was built in 1644 by King Władysław IV Wasa in memory of his father Sigismund. Sigismund had declared Warsaw the capital of Poland in 1596, before that Krakow had been the state capital. The two and a half meter tall, crowned figure in royal regalia with a large cross in one hand and a saber in the other hand was once placed on a 20-meter-high baroque column. Four panels were placed on the base, listing the king's greatest achievements. In its design, the column is more reminiscent of religious than national symbols, which is seen as an indication of Zygmunt's close connection to the Catholic Church.

The design of the Sigismund monument came from Constantino Tencalla, the integration into the arrangement of the square by Augustyn Locci. Warsaw bell founder Daniel Tym cast the statue in bronze based on the model created by the Italian sculptor Clemente Molli.

The Sigismunds pillar was destroyed by German troops in 1944, but almost five years later it was rebuilt, now also as a symbol for the reconstruction of the completely destroyed city.

Destruction and reconstruction - today the pride of the capital 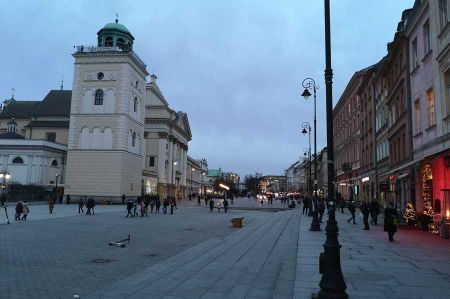 Before the destruction of Warsaw in 1944, the Palace Square was one of the busiest in Warsaw; A steep road led from Schloss Platz down through the Felix Pancer Viaduct to Kierbedź Bridge and on to the Praga district on the right bank of the Vistula. In 1944 the viaduct and the bridge were blown up.

Instead of restoring the pre-war state, the Warsaw city planners showed their creativity and inventiveness in the Biuro Odbudowy Stolicy and designed a road tunnel under the Palace Square in the middle of the ruins, which was to divert traffic past the old town. The damaged Pancer Viaduct was demolished and a new, wider bridge (Śląsko-Dąbrowski Bridge) was built on the pillars of the bridge built in 1859. The old houses above the tunnel ceiling have been carefully restored. On July 22, 1949, the new east-west route was opened. Now the traffic rolled down the tunnel and the palace square was converted into a pedestrian zone. 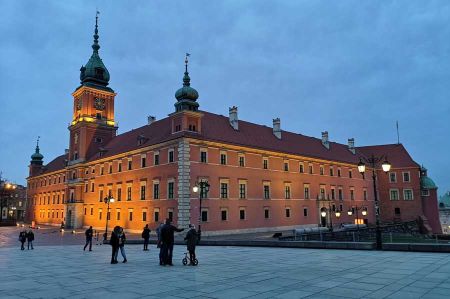 The tram stops at the bottom of the tunnel were connected to the square by an escalator, which we also used to get up to the Schloss Platz. The reconstructed Warsaw Old Town was opened in 1953, and the Warsaw Royal Castle was only completed in 1988. By this time the Schloss Platz appear in its current state and became a magnet for the public.

Small restaurants in the side streets were inviting people for a stop, here it was in particular a small shop with the typical Polish dish Pierogi, which we could enjoy heartily and sweetly in the variants. Of course home made, hmmm delicious!