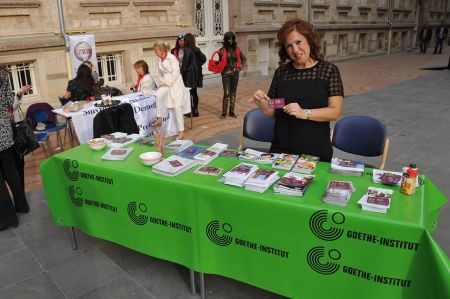 The day our journey officially started, came around at last on April 4th, 2014, Friday. Our project, which is called “Journey of Culture and Intimacy along the Roman Roads”, was the most important part of ceremony day program.

Firstly, various speeches were planned to do within the context of presentation and briefing event. The speeches were going to be done both in the building and outside, at the court. In the evening, honored guests were going to make ceremonial speeches and the band "Unterbiberger Hofmusik" was going to perform. The cocktail party, which became compulsory on Goethe-Institute events, was going to be the closure event of the evening.

With the help of our collective preparations (the arrangement of the parking space and planning of the route), transportation was not a problem on Mithatpaşa Street, which usually has busy traffic at the first hours of the afternoon. The formerly preparation of the parking space and people’s assistance were the advantages for us. By this way, our presentation vehicle, which was carrying the lucid map of the Roman road network, could park in front of the Goethe-Institut İzmir building as a remarkable element. When the vehicle was ready, the brochures and publications about the Goethe-Institut and the project of “Journey of Culture and Intimacy along the Roman Roads” were prepared on the table quickly. The coordination and the distribution of the publications were undertaken by the workers of the Goethe-Institut.

Within the program of the afternoon, there was a classical music performance by a band with four members in the open area. The band consisted of Ece Akçayüzlü (Violin), Alkım Önoğlu (Violin), Selen Çelik (Viola) and Yusuf Çelik (Cello). Again, in the open air, there were several activities of  “Smyrna Business and Professional Women Association”.

At 16:00 o’clock, the presentation of the documentary movie called “Hadi Tschüss” started at the library of Goethe-Institut İzmir.  The movie portrays the stories of people who keep on living in both Germany and Turkey. Also, the directors of the movie, Matthias Ditscherlein and Anne Denkinger participated in the presentation and replied the answers of the guests. The questions were especially about the projection of this movie at the cinemas and financing type called Crowdfunding.

This was followed by a collage movie called “Goethe-Institut İzmir from past to today”, by the Institute itself.  It was prepared under the responsibility of a Goethe-Institut staff.

At 17:00 o’clock, we began our project presentation. It was based on the planned routes, activity places, arrangement of the project inside the caravan and presentation over the internet. After this PowerPoint presentation, which was about the aims of the project and how to put these aims into practice, the project oriented questions were answered. Then, it was time for a visual documentary, which was called “Regarding the History of Goethe-Institut İzmir and Turkish – German Culture Committee”. Throughout the years, the institute and the committee developed a close collaboration.

Then, institute manager Mr. Roland Schmidt invited all the guests to the new activity hall of Goethe-Institut İzmir. Even though it was still under construction, the hall was providing a clear insight about the future activities. In his introduction speech, Roland Schmidt emphasized once again: Although it is still described as “the little Goethe-Institut in İzmir”, the institute is counted among the biggest ones for a long time. As a matter of fact; it does not attract attention with only the 60th anniversary. There is no need to mention the good condition of the finance and the balanced budget.

The following speeches belonged to Prof. Dr. Hamdi and Prof. Dr. Metin Çolak (both of them were the members of Turkish-German Culture Committee of İzmir) and they explained once again the numbers and effects of Goethe-Institut. Both former managers of the Goethe-Institut told the different anecdotes and shared their experiences. Afterwards, Mrs. Maria Lunau from the German Consulate in İzmir and Mr. Muzaffer Tunçağ, the counselor of Izmir Konak Mayor made a short speech. Özlem İleri, who is a determined member of the team, spread on effort to interpret all of the speeches. Lecturer Mr. Melih also helped her. By this way, everybody understood the speeches.

The most interesting activity of the night was the performance of the band “Unterbiberger Hofmusik”:

The heart of the band “Unterbiberger Hofmusik” consists of Irene and Franz Josef Himpsl and their sons Xaver, Ludwig and Franz. Except for Franz, who is nine years old, all of the members are musicians who took professional musical education.

This music enthusiast family lives in a typical Bavaria town of Unterbiberg. The building of their house belongs to a historical beverage factory and it was reconditioned. The town of Unterbiberg is close to the city of Munich and displays all the characteristics of Bavaria that derives its traditionalism.

However, Himpsl family crosses the limits of their music perceptiveness with courage that loyal to their roots more than fifteen years. The family members, who have intimate knowledge about their roots, behave confidently and preserve the respect for their roots. They create exciting and confounding compositions and musical arrangements.

The collaboration of these geniuses was started by the Brazilian trumpet player Claudio Roditi. After performing as the guest of Himpsl family at the Münchner Unterfahrt club in Unterbiberg town, they made a special meeting and came with the idea of the crazy project.

Just a few months afterward, under the brand of Himpsl Records, they released their debut album, titled “Bajazzo”. Once they made a beginning, the rest continued. They released five more albums with the collaborations of successful musicians such as Andrew McNaughton, Jay Ashby, Matthias Schriefl and Şeref Dalyanoğlu.

The genre of these albums cannot be categorized and this caused the invention of terms like “Traditional Blend” or “Local Jazz” that require courage. By the way, they have an increasing fan base, who watch and applause excitedly these musicians from the town of Unterbiberg.

Their 7th album, which they produced with Jay Ashby and titled “Bavaturka – Turkish Journey”, is the proof of the applause.

This album as well proves that collaborations, even friendships come into existence from the culture oriented curiosity and open-mindedness. Aforementioned friendships correlate the traditions with each other by maintaining its naturalness and create the unheard by combining it with music.

The leader of the band and father of the family, Franz Josef Himps explained in a most impressive way that how this could happen and the work titled “Bavaturka – Turkish Journey” was produced:

“Five years ago, if somebody had been predicted about hosting a Turkish program, honestly, I would have shaken my head far from understanding.

You know what they say: Never say never... Actually, the seeds of this progression were planted when we visited İzmir and İstanbul with the invitation of the Goethe-Institut between the years of 2005 and 2008. While we were in Turkey, we met incredible hospitality, extremely interesting people and splendid musicians. Besides, we had a chance to know about Turkish music and the effects of these impressions continued until today.

I wonder if there was a longstanding connection between Turkish and Bavaria music and did they interact with each other? Odd harmonics and modes of Turkish music serve as a model to the Balkanic music over 300 years.  It is impossible not to hear it. Balkan music indirectly affects the Bavaria music.

Our fusion idea of Turkish and Bavaria music started to take a form by harmonizing with the typical “Unterbiberg Style”. With the help of these first steps to a different world in a musical sense, we experienced sweating rehearsals. At this point, if we were not supported by professional musicians, most probably we would not make much progress... Long live, dear Şeref!”