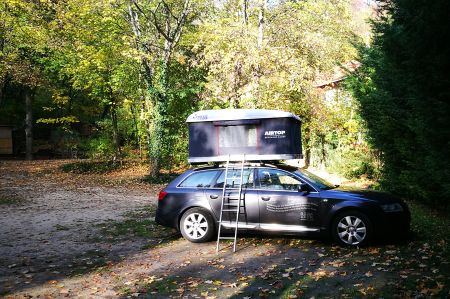 Many times we have encountered limits in the course of our project work on the development of gentle tourism and the creation of an easy-to-follow camper route in the Balkans, which we had little or no consideration in the planning of the places to be integrated during the exploratory work.

For example, we are already approaching places which are not developed very well in the run-up, as is the case for the Albanian Alps as well as for certain regions in Bulgaria or Romania. Here we proceed in the way that our project car Fendt Saphir Scand remains in a safe location and we initially only take off by off-road car, especially when exploring hiking.

How often we realized the situation on the ground that we would have liked to spent the night on the spot, in short, the necessary equipment was missing, which would be quickly ready for use and still occupy little space. Space and weight is often the problem for travelers. A roof tent could be the perfect solution here, especially since some manufacturers offer solutions where mattress and bedding, even an interior lighting, are continuously present.

In the former GDR there were already very simple roof tent for the Trabant at an early stage, officially designated as Müller - Autodachzelt by its manufacturer, but in the peoples mouth they were often referred to as Pension Sachsenruh. Alternatively, the term canvas villa was also widely used. Nowadays, tents often resemble a large roof box; Whereby the shell of the roof is simply set up and thus a tent is created that offers enough space for two people. The shells are usually made of GRP (glass-fiber reinforced plastic) or injection-molded. The tent fabrics are more solid than normal tents and with high-quality dents a separate outer and inner tent is used, so that no condensation occurs inside the tent. Modern dormers usually also have an ingenious ventilation system. Ventilation openings are placed in the upper area of ​​the roof tents (shells) so that the rising heated and moist air can escape and can be replaced by fresh air.

Our dear friend and frequent host Toni Zampetas in Thessalonica had such a roof of a well-known manufacturer, which we wanted to proof for exploring on a tour to Delphi. In this way we mounted the existing cross beams on our Audi, then pushed the closed roof box onto the vehicle and fastened it with the associated metal straps, which cover the roof beams and thus ensure a fast and very firm connection. Naturally one should pay attention to the optimal orientation of the tent box on the roof, we had no restrictions during the journey. It was same with the technical precautions, a sliding ladder is available in the equipment of the tent box too.

Once in Delphi, the set up of the tent is done in a few seconds, because just two halter stripes must be opened at the front and one at the back, and the gas springs are already setting up the tent. The upper part of the roof box is used as roof construction and rain protection. Two side panels allow for easy access, both front and rear are two set-up windows, which also provide insect protection. A 10 cm thick mattress ensures comfortable sleep, the sleeping bag contributes to it. Lighting is also provided. Nets under the roof absorb the clothes that are not needed during the night rest. We loved it.

In the meantime, we were able to use the roof tent a few times, always with great success, because one does not lose any storage space, gains even more, the bed remains in the roof box. Even during the trip there is no physical impairments, so we can recommend the roof tent as an excursion overnight option, even for longer trips. We also noticed campers who installed a roof box on the vehicle to get additional sleeping places.

A journey of Intimacy and Culture along the Roman Roads

We have 386 guests and no members online