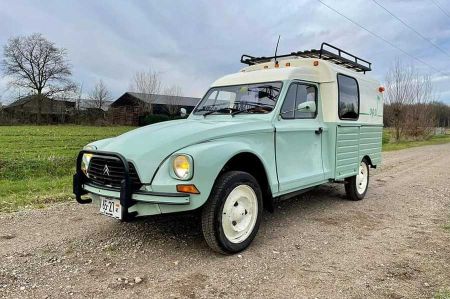 Now the inclined reader may say to himself, no, not even here with building instructions, hints and tips for converting a conventional car into a camper.

No, we do not want to join this profession, despite many years of practical experience as a camper and actually also existing professional competence. Not our thing.

However, what is our thing, at least every now and then, to point out the multi-layered designs in the expansion that we have come across over the years. Partly with their own article regarding their exclusivity, sometimes it is only the absolutely Spartan furnishings that fascinate us. Then again, it is the special usability that leads from the owners in sometimes years of small and detailed work to solution and testing.

Another model from the Citroen panel van series 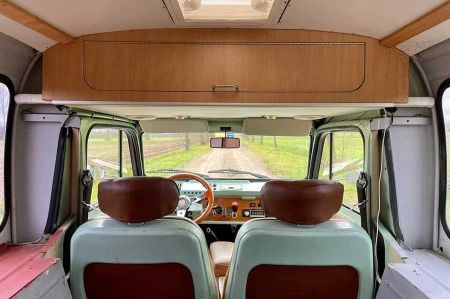 Here and now it is once again a model from the French manufacturer Citroen, which was completely handcrafted and restored with a successor to the legendary 2 CV panel van (we had already reported on the encounter with the actress / singer), and then us met the driver at the Rino campsite in North Macedonia. How impressively practical and skillfully the arrangement of the seating was, became clear when an electric piano emerged from under the bench. 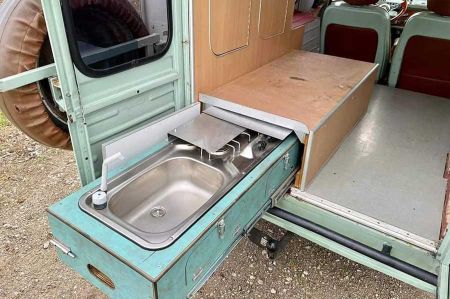 The Acadiane was a successor to the legendary CV 2 panel van from the French car manufacturer Citroën. The Acadiane, designed as a delivery van, was fundamentally based on the somewhat “more luxurious Dyane”. While the Dyane was unable to replace the 2CV in its popularity, the Acadiane succeeded the AK panel van in the summer of 1978. It was also built three years longer than the Dyane.

Right from the start, the Acadiane had the larger engine with 602 cm³ displacement and 31 HP (23 kW) at 5750 / min and a maximum torque of no less than 41.2 Nm at 3500 / min (my HNF e-bike today has 82 Nm ). The chassis was similar to that of the 2CV: All wheels were suspended from parallel arms with horizontal coil springs. The vehicle had disc brakes on the front axle. Thanks to the slightly more streamlined shape, the top speed rose to almost 100 km / h. According to the ECE standard, consumption was 5.7 liters at 90 km / h and 7.2 liters of premium gasoline in city traffic.

Wide double doors make the storage space easy to use 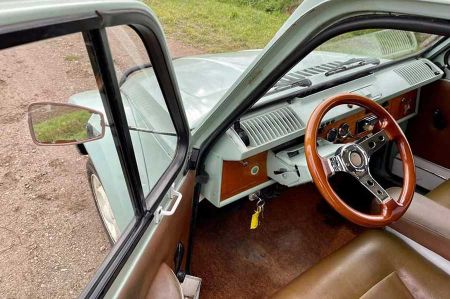 The vehicle differed from the sedan by a 135 mm longer wheelbase, a higher, fixed roof over the front seats and the box-like cargo space from the B-pillar. This structure could be loaded through a split 1 m wide wing door at the rear. The box structure was larger than that of the AK 400, it could hold a Euro pallet lengthways and held a total of 2.27 m³. The permissible payload was 435 kg. Side windows, square multi-chamber taillights instead of the round ones of the AK and rubber horns, which together with a transverse tube served as a rear bumper, were standard. In the sides of the box structure, at the bottom in front of the wheel arches, there was the fuel tank (passenger side) and an externally accessible, non-lockable compartment (driver side).

Unlike the Dyane, the van was equipped with crank windows. The Acadiane had armrests and storage pockets on the door panels, the two-spoke steering wheel of the 2CV Spécial and two exterior mirrors. The other accessories consisted of a small tool bag, a starting and jacking crank, which could also be used as a wheel nut wrench, and a wooden wheel chock.

In France, the vehicles were often to be found at the post office and small businesses, in Germany, on the other hand, they were also widespread as minimalist mobile homes ("travel ducks"). There are different construction and expansion forms such as a four-seater made in Belgium or modified variants from Yugoslav production.

Magirus Deutz Camper at Zampetas in Thessaloniki
On the way to New Zealand - America later on?!