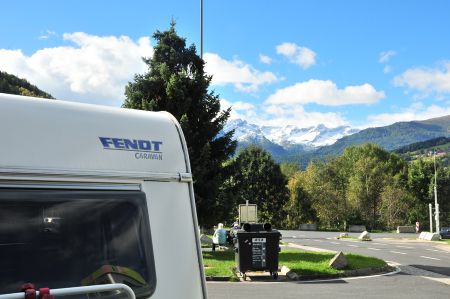 After our appointments with our sponsor Fendt-Caravan in Mertingen and the various destinations in Passau and Künzing, which we were able to undertake together with our friend Horst from Kösslarn, so that additional the topics hiking and outdoor tourism in connection with our project work on the Balkans could be discussed.

Our next planned destination was the newly installed camper stop at Ljubljana in Slovenia, which we wanted to reach using the Karawanken Tunnel at Villach.

Already during the journey to the tunnel, the approaching winter became more and more clear. Deep snowy clouds were moving between the mountains, partly already white, snow-covered slopes and peaks glittered in the gray haze of the clouds. In addition, it was getting really cold, as some intermediate stops in the parking lots made more clear, in short, the winter had already arrived, at least in this part of Austria.

A special toll is payable for the tunnel. The amount for the car toll with and without trailer is 7,20 Euro (as of October 2016) and can be paid cash or with credit card (VISA / Mastercard). Because of the expulsion as a special road the Karawanken Tunnel can be driven without Austrian vignette. As far as the Hrušica exit, the route can also be driven without the Slovenian vignette according to Asfinag. In spite of this rule, however, you should buy the respective vignettes immediately before the border with Austria and before the border with Slovenia and stick them to the windshield, as otherwise drastic penalties threatens. Control is often carried out not only at the control points along the routes, but also from bridges, where the flowing traffic is observed with binoculars. So better never without a vignette!

The Karawanken Tunnel was built between 1986 and 1991 and connects the Austrian Karawanken motorway A11 with the Slovenian A2 motorway in the direction of Ljubljana between Jesenice and Rosenbach. It passes through the Karawanken, a mountain range of the southern limestone Alps. The journey time from Villach to Ljubljana has been reduced by more than an hour since the opening of the 7,864-meter-long tunnel. The tunnel is still one-tube, so there is upcoming traffic in the tunnel and a lasting tempo. However, a study was commissioned to determine whether the construction of a second tube appears to be meaningful.

After crossing the tunnel and turning into the valley of the Save in direction to Ljubljana, the weather was also noticeably better, serious sunrays could break through the clouds. We were looking forward to the days at the camping place Princeplatz, especially since visits to the old town of Ljubljana were planned, but we will report later on.