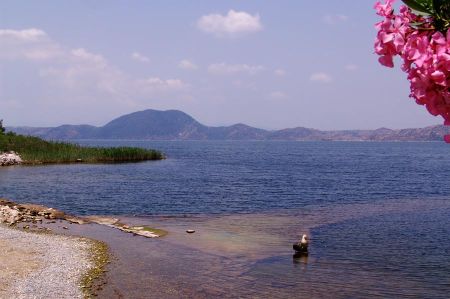 Bafa Lake is situated in southwest Turkey, part of it within the boundaries of Milas district of Muğla Province and the northern part within Aydın Province's Soke district, approx. 30 km from Didim.

The lake used to be a gulf of the Aegean Sea, named Latmus in antiquity, till the sea passage was gradually closed by the alluvial mass brought by the Great Menderes River.

The southern shore of the lake is traced by the Izmir-Soke highway connecting to towns such as Milas and Bodrum.

The northern shore of the lake, where steep slopes are covered by wild or semi-domesticated olive trees, is virtually untouched to this day.

At the innermost north-east tip of the lake is the village of Kapıkiri, a village of just 320 residents, as well as the ruins of Heraclea by Latmus (also called Heraclea in Ionia), to discern from other ancient Greek sites named Heraclea. Square and rectangular stone walls in 6.5 km length with 65 towers are surrounding the ancient Heraclea. Well conditioned "The Temple of Athena" stands on the rocky area behind the harbour and is an example of two-column Hellenistic construction. On the eastern side of the temple you can find the rectangular constructed agora which has two stories. Only its first floor still exists today. The theatre is situated in the northeast of the city.

Heraclea became a safety land of hermitage for monks and priests in the early evangelisation of Asia Minor Christianity. The first monastery was established in the 7th century AD and many monasteries spread around Heraclea. A castle was built to protect monasteries that were scattered through this wild region. The caves around, which are considered to be inhabited by the monks and hermits, are ornamented by marvellous frescoes representing the life of Jesus Christ, Virgin Mary and the saints.

A flooded plain in the past, this region comprises the ecosystem features of the Great Menderes Delta in our day and provides habitation for various endangered bird species for reproduction and settling in.

It is an area for residence in winter for more than 300.000 water birds of different species. The boat trips are a wonderful way to see some of the rich birdlife, including flamingos that come over during winter amid the more common coots, grebes, egrets and herons. More than 200 bird species have been recorded in the area. On the western shore of the lake, there is a bird observatory which is a point of interest for local and foreign bird observers in the winter and spring months.