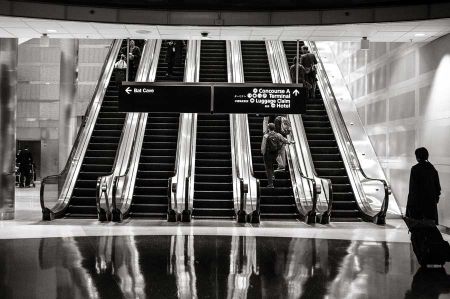 Adnan Menderes Airport (Turkish Adnan Menderes Havalimanı) is the airport at İzmir. It is located about 18 kilometres to the South of the third largest Turkish city, Izmir.

Selçuk and Ephesus are 60 kilometres away. The airport is named after the former Turkish Prime Minister Adnan Menderes. It has three terminals. The third terminal was opened in August 2006 and has a capacity of 5 million passengers per year, as well as an additional parking space for 2,200 cars. The other two terminals are used for domestic flights and for the arrival of passengers without checked baggage.

The airport can be reached from the city centre of Izmir via the expressway 550, the European route E87 and the Izmir-Aydın highway.

A Havaş bus shuttle runs every hour from Alsancak city centre and from Mavişehir to the airport. The departure point in Alsancak is the Efes Hotel and in Mavişehir the shopping centre EGE Park. Apart from these departure points, no passengers are accepted on the way to the airport. The journey from the airport to Mavişehir leads via Gaziemir, Karabağlar, Yeşildere, Kahramanlar, Basmane, Çankaya, the Efes Hotel and Karşıyaka. You can get off at Orcaner in Karabağlar, at the Efes Hotel in Alsancak and in Karşıyaka. The journey takes about 50 minutes and costs 10 TL during the day and 12.50 TL at night. The buses stop at both terminals.

A cheaper alternative is the city bus lines 200, 202 and 204 of the transport company ESHOT. The buses stop at both terminals. You can get on and off at any stop. The stop at the international terminal is to the left of the exit for arriving passengers. This is marked with ESHOT and provided with the departure times. The cheapest way to travel is by city bus if you have a “Kentkart”. However, you can also buy a 3-trip card from the driver. This costs 5.50 TL.

Line 204: Airport - Otogar (via the Bornova metro station to the bus station)

Taxis are also available at both terminals.

And a little bit about the background story

The airport is named after the former Turkish Prime Minister Adnan Menderes, who was executed as one of the main persons responsible for the Istanbul pogrom due to the "Organization of anti-Greek riots in 1955".