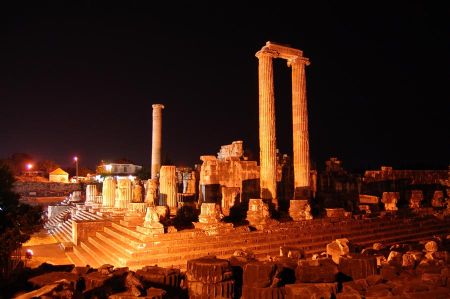 The Apollo temple of Didyma (the Didymaion) is located within the boundaries of the Yenihisar (Didim) district which is in the province of Aydın.

As well as being an important oracle seat for centuries, the Didymaion was also renowned for its sacred water, sacred grove, the many sacred elements it housed, and its wealth. The source of the wealth of the temple came from donations and votive offerings made in varying forms. The very valuable offerings of King Necho of Egypt, King Croesus of Lydia and King Seleucus II of Pergamum, had an important place among the donations made to the Didymaion.

The donation of various sacrifical animals, 1,000 in number, and 12 rams by Lysimachus, was also one of the interesting offerings. The wealth of the Didymaion is understood by the fact that Miletus attempted to build a fleet with the treasures of the temple before the battle of Lade.

Another feature of the Didymaion was that it had the right to shelter. This right which was known as "the Right of Asylum," was the recognition of the right of sanctity to people that took refuge in the temple. The right of asylum, which therefore created many problems, was a reason to the rise of many discussions on this matter. However, the boundaries of the right of asylum were gradually enlarged and were increased to 3 kilometres by Emperor Augustus Trajan enlarged the boundaries even more and wanted them to be recognized from the beginning of the Sacred Road.

It is understood from inscriptions that the festivities and ceremonies held every year in spring went on even after the Didymaion was completely destroyed in 494 BC. The journey from Miletus to the Didymaion was made by sea or by the "Sacred Road". The group of people who set out from Miletus with ceremonies begun in the Delphinion where they received the sanctification of Apollo and were sent forward by the Delphins, came from the Lions' Harbour to the Panarmos Harbour, and from there reached the Didymaion on foot. First of all, sacrificial beasts and votive offerings were presented to the god, then, after ceremonies to the accompaniment of music and chorus, the important persons entered the temple, and after that, the questions asked by inquires were answered by the oracle. These ceremonies were directed by the Stephanephors. It was shown in inscriptions that the Emperors Augustus and Trajan took the title of Stephanephor and carried out this position. In the Roman period, the Sacred Road gained in importance as the harbours filled up with alluvial mud and travel by sea became unfeasible.

Because this extremely impressive and magnificent temple was not completed it is not considered among the seven wonders of the world by the authorities.