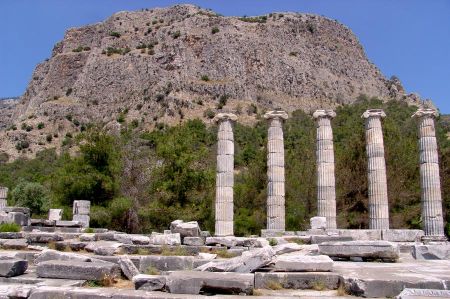 Miletus is located (an hour away from Didim) in the city of Soeke's Balat village. In ancient times it was on the western coast of Anatolia (currently the province of Aydın), near the Maeander River in ancient Caria.

In the 4th century BCE, Priene was a deep water port with two harbors overlooking the Miletus Bay and further east the marshes of the Maeander Delta. Although Priene's territory might have included a part of the Maeander Valley, between the ocean and steep Mycale agricultural resources were limited.

At the entrance of the ruins the road on the right leads to the Theatre of Priene. The theatre was built during the Hellenistic period, and underwent modifications during the Roman period. The theatre consists of 50 rows of seats and has a capacity of 5.000 people. The section of the orchestra of the theatre has five marble armchairs reserved for noble people.

The Themenos of Egyptian Gods is situated on the right of the theatre. In the front of the theatre is the upper Gymnasium and by its side is the Byzantine church.

The Temple of Athena belongs to the 4th c. B.C. The architectural work was done by Pytheos whom also built the Mausoleum of Halicarnassus. The temple has 6 x 11 columns and the dimensions are 19.55 x 37.20 m. A few columns of the temple have been erected and are classical examples of Ionian architecture. The eastern half of the temple was completed by Alexander The Great. In the past, the altar in the front was decorated with high relieves and belongs to the 2nd century B.C. The Stoa that displays a beautiful example of stone workmanship is at the south of the Temple of Athena.

Downwards from the temple you will see the Agora of Priene which belongs to the 3rd century B.C. Next to it used to be a fish and meat market. North of the Agora is where the sacred Stoa belonging to the 2nd century B.C. is situated. The Bouleuterion (Assembly building) which looks like a small square theatre, with dimensions of 20 x 21 m and a capacity of 640 people, is adjacent to the Stoa. Adjacent to the Stoa there is the Prytaneion (Town Hall) from the 2nd century B.C. which is where the sacred fire used to burn. East of the Agora is where Temenos of Zeus Olympios is situated. There are houses on both sides of the avenue which connect the Agora to the western gate. The western gate side of the avenue is where Temenos of Kybele and the house of Alexander the Great are situated. Further south of Priene, the lower Gymnasium and the Stadium are situated.