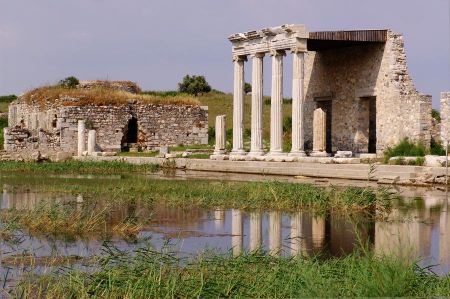 Miletus is located (an hour away from Didim) in the city of Soke's Balat village. In ancient times it was on the western coast of Anatolia (currently the province of Aydın), near the Maeander River in ancient Caria.

Miletus was one of the most famous of Ionian harbours. In Hittite records its name was Millawandash. It was famous during the classical period which the scholars called "fusiolog". Herodotus wrote that it was founded by the Cretans and Carians. It was also an important Micanean colony towards the middle of 2000 B.C.

During the Pleistocene epoch the Miletus was submerged in the Aegean Sea. Consequently, it emerged slowly, the sea reached a low level of about below present level at approximately 18,000 BP. The site of Miletus was part of the mainland. A gradual rise brought a level of about below present at approximately 5500 BP, creating several karst block islands of limestone, the location of the first settlements at Miletus.

At about 1500 BCE the karst shifted due to small crustal movements and the islands consolidated into a peninsula. Since then, the sea rose 1.75 m but the peninsula has been surrounded by sediment from the Maeander River and is now land-locked. Sedimentation of the harbour began at about 1000 BCE and by 300 CE, Lake Bafa had been created.

In the 7th century B.C. the Miletus people had founded about 90 colonies in the Mediterranean and Black Sea regions. Unfortunately, after its destruction by the armies of Darius in 494 B.C. it was reconstructed and was under Persian rule for two centuries.

With the conquest of Alexander The Great it became one of the greatest metropolis of Aegean Anatolia and throughout the Roman period as well.

Yet, in the Byzantine period, despite the fact that the sea had withdrawn, the commercial port could still be used thanks to the ships which sailed through the Menderes River. This was because the remains of the antique buildings resembled palaces. It was known as Palatia for certain period of time and during the last days of Byzantine rule it became a shelter of pirates.

Then, in the 8th century it was converted into a Turkish town by the Mentese principality and named Balat. Although it went through a period of splendour during the rule of Menteşeoğulları and then gradually it lost its importance. In the 18th century it turned into a small village and the village mentioned was moved elsewhere after the 1955 earthquake.