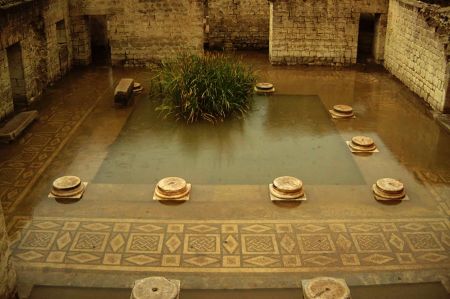 The most recent reports from Turkey about the Roman spa complex of Allianoi, sent by the local Allianoi Initiative led by the archaeologist professor Ahmet Yaras, says that now only the tops of excavated walls and columns poke through sand that workers employed by the Turkish State Waterworks are laying.

This outstanding Roman archaeological site is being made ready to be submerged under water as work resumes on the controversial Yortanli dam. If the dam's construction goes ahead and the valley flooded to create a reservoir, ancient history will be lost by an irrigation scheme with an expected life-span of only 50 years.

Excavated by archaeologists only relatively recently, the ancient spa complex of Allianoi near Bergama in western Turkey has already revealed many historically rich monuments, including the thermal baths, bridges, streets and dwellings, and provided important scientific insights into Roman art, architecture, engineering, hydrology, medicine and pharmacology. Enlarged by the Emperor Hadrian, Allianoi dates mainly from the 2nd century AD, a time of emerging urban centres in Anatolia and of the construction of the famous Asklepion of nearby Pergamon.

In breach of international covenants

Europa Nostra immediately renewed its plea to leading Turkish politicians to save the site when we heard that work had begun to bury Allianoi in sand, in preparation for its flooding. We also informed the European Commission, European Parliament, Council of Europe and Unesco of our plea. We re-iterated our firm belief that should Allianoi disappear first under sand and then under water, this would constitute a breach of international regulations and covenants signed by Turkey, and would be contrary to the country’s own court injunctions. This latest plea continues our long-standing campaign in support of Allianoi and of finding alternative solutions to save it. In 2007, we joined forces with the International Council on Monuments and Sites and the European Association of Archaeologists to launch a public appeal to save Allianoi. So far, the combined local, national and European campaigns have managed to delay the dam. We now fear that the moment when Allianoi will be lost is drawing closer and closer.lternatives to flooding the site

Back in 2006, the Turkish minister of culture set up a special scientific committee that recommended a series of alternative conservation measures which could be undertaken at Allianoi if the valley was flooded. These included the protection of the site as a sunken island by the construction of an earth wall, or the relocation of some of the archaeological site’s most important structures. These recommendations brought some hope for the future of Allianoi.

We deeply regret that the Turkish government did not take those recommendations duly into consideration. Instead, it seems to have remained deaf to local, national, European and international pleas from concerned citizens and professionals alike. Yet, we continue to believe that it is still not too late for Turkish political leaders to take necessary action to avoid such a cultural tragedy to take place. Allianoi need not be sacrificed.

In Allianoi, the issues at stake are clear: a significant European cultural heritage site will be lost along with the potential for tourism-led economic development in the area. Tourism based on the unsustainable model of large hotels on sandy beaches, might benefit those on the narrow strip alongside its coast but not Turkey's vast interior. Sites such as Allianoi, which could be developed into a cultural and health tourism centre, would give deeper cultural and social meaning to the economic benefits of tourism, and would offer an example to follow also to other countries in the wider region, from Bulgaria to Syria.

What will be lost is not only a site of archaeological importance, but also a tremendous opportunity for sustainable development. Turkey has an embarrassment of architectural and archaeological riches, from the Roman era to Justinian churches and Ottoman mosques. But the quantity and scale of these remains is no reason to deliberately sacrifice others such as Allianoi. The opportunity these sites represent—Allianoi included—is that of development led by sustainable tourism. Such alternatives require vision, long-term policy, bravery and leadership on the part of the government, but will undoubtedly pay dividends for Turkey and for the rest of Europe.
Dams versus cultural heritage

The construction of hydroelectric dams and power stations in the Black Sea region is one of the main threats towards the cultural heritage of the ancient Mesopotamia region where river basins begot important centres of civilisation which lasted for thousands of years. Already, in south-east Turkey important cities such as Samsat have been affected by dams, and currently Hasankeyf with its important symbolic meaning for the Kurds, is similarly being threatened.

Big construction firms and the support of international and national banks allow the financing and building of such mega-projects inTurkey. The environmental movement and Turkey’s fledgling heritage organisations are unfortunately still too weak when matched against big businesses and the politicians at national and regional levels who support such projects.

The question of future water supply is going to be a difficult one for Turkey. The careful harvesting and marshalling of water can and should be balanced with Turkey’s other precious resource: its phenomenally rich and diverse cultural heritage, the potential of which has only been partially unfolded. The future prize—an expanding but sustainable tourism development beyond the coastal strip based on the respect and understanding of our common European heritage—must be worth it.

The writer is the secretary general of Europa Nostra, a European federation of heritage organisations committed to raise awareness of the value of Europe’s cultural heritage and to work to protect it for present and future generations.

Conservationists argue that development of archaeological site would be more beneficial than irrigation plans.

Several metres of sand now cover the second-century Roman baths at Allianoi, the largest in Asia Minor. The wall paintings and columns, a few kilometres from the ancient city of Pergamon in western Turkey, have been buried and may soon be submerged beneath 17 metres of water.

"It has become a political issue and the government is trying to get rid of Allianoi. We want to avoid a massacre," said Güven Eken, head of the Doga Dernegi conservation group. Last month Eken and a handful of activists chained themselves to the cranes on the construction site to draw attention to "a massacre of nature and a violation of the law".

Protesters say the layer of sand, which is supposed to protect the ruins, is ill-suited to the job, and cement containing brick dust is being used. The feasibility of the project itself, which involves building a dam and reservoir for irrigation of local farms, is open to doubt. "The river has run completely dry," Eken said, "and there is no certainty there will be enough water to fill the reservoir."

He added: "The government refuses to admit that Allianoi is an exceptional site and that the problem of water for farmers can be solved without wrecking our heritage."

The Yortanli scheme, started 15 years ago, disregards Turkish law on the protection of natural and historic heritage. A dozen or so court rulings have already sought to stop construction. The Allianoi ruins, if properly exploited, could have attracted hundreds of thousands of visitors every year.

The minister of culture and tourism, Ertugrul Günay, said that alarmist calls to save the ruins were "exaggerated". He maintained that the historic heritage would not be damaged in any way by the work. His counterpart at the environment ministry, Veysel Eroglu, was less diplomatic in his treatment of the popular singer Tarkan, who campaigned to save the Roman baths. "He shouldn't poke his nose into issues he doesn't understand," Eroglu said.

"Allianoi is being sacrificed for the sake of Eroglu's policies," Eken said, drawing attention to the many conflicts of interest involved. The minister, previously head of the state hydraulic works, which is responsible for supervising dam building, has launched a large number of irrigation and hydroelectric power projects since his appointment in 2007. Another reservoir, to be built on the Tigris at Ilisu in south-eastTurkey, has stirred up wide opposition. It threatens to engulf the ancient town of Hasankeyf.

Activists chain themselves to crane in ancient Allianoi

A group of environmental activists have chained themselves to a crane in Allianoi, the world’s oldest known spa settlement, which is at risk of being submerged under water following the construction of a nearby dam.

Yesterday, six members of the Turkish Nature Association went to the site to protest the damage to Allianoi, chaining themselves to a crane and carrying sings that read, “No to illegal culture massacre in Allianoi.” Gendarmes took safety precautions and asked the group to end their protest. The gendarmes later cut the chains and detained the activists.

The possibility of the ancient city being destroyed by the Yortanli Dam remains a contentious issue in Turkey. Allianoi sits inside an area that is expected to be submerged by the dam, the construction of which was recently completed. The dam is not yet fully operational due to the ongoing discussion regarding the preservation of Allianoi’s ruins, which will be inundated and most likely destroyed if the dam is put to use. Two cranes are covering the site with sand before it is flooded by the dam.

Speaking to the Anatolia news agency, Turkish Nature Association President Güven Eken claimed that decisions by the Culture and Tourism Ministry’s board to protect natural and cultural heritage have been violated in Allianoi, saying: “The ancient city is being covered with sand and gravel despite board decisions. We carried out this protest to document this crime.”

Eken also called on Culture and Tourism Minister Ertugrul Günay to take action. “The minister can stop this disaster. It would be the best for him to come here and see the situation.”