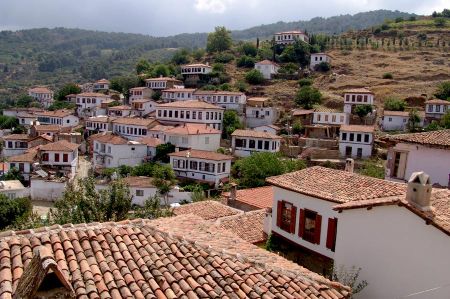 Sirince is a small Aegean village visited by many people because it preserves its historical architecture. It became famous as being the location where the story of the novel called “Farewell Anatolia” takes place. The novel was written by Greek author Dido Satiriou.

After our visit to İzmir on Fathers Day, we stopped by Şirince for lunch. Even though I previously read many articles about Şirince, the beauty I came up on surprised me, this tiny village spreads an unexpected energy around itself.

Şirince is an old Greek village, connected to the Selçuk County of Izmir, about 8 kilometres distance from the centre. It was a small Greek village that primarily produced and sold figs in the 19th century. The name of the village was “Kırkınca” (Fortieth) at those times. According to one rumour, the village took that name because it was built by a family of 40 tribes. The name of the village was pronounced as “Kirkince” by the Greek and later on became “Çirkince” (Like Ugly). But during the first years of the Turkish Republic, when the governor of İzmir of that period, Kazım Dirik said; “What is ugly about this village, this village is a sweet village”, with the instruction of the governor, the name of the village was converted to “Şirince” (Cute/sweet).

The village still bears the characteristics of Greek villages. Its Albanian pavements, narrow streets, two-story private houses, wines produced from the grapes of the vineyards in Şirince, and again the olive oil produced in the village and the shops selling olive oil soaps, small restaurants located on these streets... Şirince with its overall naturalness and being untouched by humans is definitely worth seeing.

Apart from tourism, winegrowing, raising and selling of olives are the primary sources of income of the village. Next to it, they cultivate peaches, figs, apples, walnuts in the village. Different wine types produced and marketed in Sirince are famous all around Turkey.

The historical architecture of the village is protected. It is said that the history of Şirince goes  back to five hundred years before Christ. Şirince was an Orthodox village and today accommodates two churches, one of which is in ruins. The “Saint Johannes Church” has been restored with the support of Selçuk Museum and the help of the American Institute and is open to visitors once again. The second church is however mostly wooden, its paints, plasters disintegrating, in a state of a ruined church. Because the church doesn’t have an inscription, unfortunately its name is unknown.

In the old times the village had 1800 residences, today there are 200 houses present. Many Greek houses that are in the village today serve as guesthouses.

Şirince Harvest, Culture, Art and Friendship Festival takes place in October every year. During the festival season, the village is infested by local and foreign tourists. At the village centre, wine tasting and folk dancing shows and various activities take place.

If your way comes across Şirince, you can stay at an old Greek house that has become a guesthouse or hotel, you can stroll upon the Albanian pavement streets and visit the shops selling souvenirs and buy the famous Sirince wines and olive oil soaps to take back home with you.