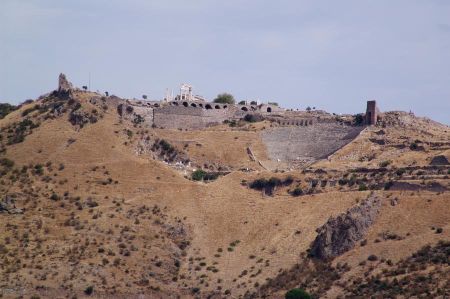 In ancient times Pergamon was a famous city centre because of it’s well known and huge library. Today you can just visit the ruins of Pergamon (the name today is Bergama), most visible place in the town is the former Acropolis (mountain with castle), the former city centre and the Asklepieion. These sights belong to the ancient Pergamon.

Because there are still lot of interesting small spots to find, you should spend a whole day over there.

The Acropolis is situated to the north of Bergama. Scientists have added a clone of the famous Pergamon altar. The original Pergamon altar is still shown in the Pergamon museum on the island of museum in Berlin. Next to the Pergamon altar you will see the ancient theatre, some more altars, ruins of several temples and the higher Agora (former higher market place). The ancient road is leading down to the former city centre. In the centre you will see the ruins of the thermal bath, temples and the Lower Agora.

Opposite of Bergama, about one kilometre away from the lower city centre, you will find the Asklepieion, another huge collection of more ancient buildings which belonged to a former quite well known health resort in the city borders of Pergamon. Asklepieion was so famous because of the really high knowledge and standards of the sanatorium and for sure because of its leader the doctor Galen. Next to this place you can see another health centre, a small theatre, the library and some more temples.