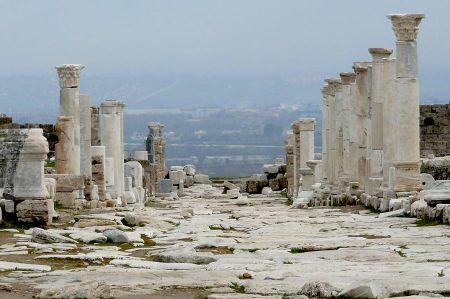 The founding of Laodicea probably dates back to King Antiochus II, who had built the new town between 261 and 253 BC on the old site of Diospolis and named it after his wife Laodicea.

Only about 6 kilometers outside of Denizli and about 10 kilometers south of Hierapolis, the visit of the ancient city as an alternative to the overcrowded Pamukkale is worth visiting. The river Lykos, which by the locals is called Çürüksu Çayı, as a tributary of the meander formed the livelihood of the historically ancient city Laodicea, whose spelling also appears with Laodikeia.

Health tourism of the Emperors Tiberius and Nero

With the further advance of the Romans, the importance of the city increased more and more, became center of a judicial district and expanded to the economic center of the region. During the first centuries AD, under the emperors Tiberius and Nero, Laodicea was hit by earthquakes twice, which was initially thought of as a task for the city. Due to the economic importance of growing cotton and the proximity to the hot thermal springs of Hierapolis, which were used by many emperors and Roman businessmen for a cure, the city was able to recover quickly and was rebuilt. In fact, the increasing health tourism of the Romans brought prosperity and luxury to the region.

Thanks to Pamukkale's mineral-rich water, Laodikeia's importance in medical terms was one of the reasons why the water was the basis for a healing eye ointment. It was also possible for the first time to mix red plant roots with water in order to dye black fabrics with a purplish color. This was an important export hit of the Roman businessmen, made it more expensive regardless of the import because with purple snails red colored fabrics from Syria. Laodikeia gradually became the purple fabric factory of the Roman Empire.

Only another earthquake in 494 put an abrupt end to the further ascent to the metropolis. When in the 12th century the Seljuks took the power and relocated the remaining inhabitants to Denizli, the remains of the city fell more and more. Even back in the time of the Ottomans, Denizli was often referred to as Denizli Ladik, to distinguish it from the former city of Ladik (Laodikeia).

Excavations by the University of Denizli

During extensive excavations of Denizli University under the direction of Celal Şimşek, one of the oldest Christian churches has been uncovered in recent years. Remains of mosaics and frescoes as well as coins whose founding date indicates dating to the early 4th century were found on the 2000 square meter floor space. An in-ground baptismal font with steps on two sides even allowed for baptizing in groups. After completion of the ongoing backup work, the church is to be made accessible to visitors.

While inspecting the grounds, the museum officials discovered the ancient mosaics and immediately began excavating them after closing and protecting the site. "Excavations have revealed that there was a basilica with apse here," said the village chief of the Ladik district, Mustafa Arabacı. It is expected that the excavation work on the site will be completed by spring, Arabacı said, adding that the basilica will then be open to the public.

Laodicea is currently on the preliminary list of UNESCO World Heritage Sites in Turkey.

In March, the restoration, which is currently taking place in the ancient city, was awarded the Special Prize of the European Heritage Jury.
Laodicea is considered one of the most important ancient cities of Anatolia and houses one of the seven churches of Asia mentioned in the Book of Revelation