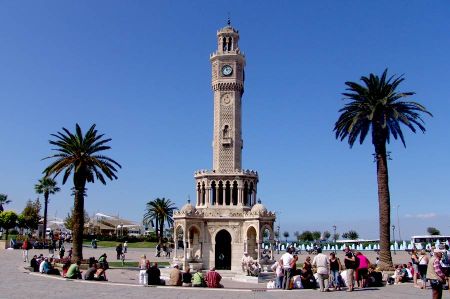 Rarely there are such different views and opinions as when asked about “life in the big city”. For some it is simply unimaginable for others it is the dream of life par excellence.

Even if economic considerations sometimes play a decisive role, in the course of life there is still the chance to implement your own wishes. If life in the city for one group consists just of hectic, dirt, noise and traffic without end, for the other it means lifestyle, shopping, short distances and a large selection of everything. But isn't it good that we all have such different approaches and ideas about life? Please read the report by Christian Michael, who got to know and appreciate the Turkish metropolis Izmir as a visitor:

Underestimated by tourists, the city on the Aegean Sea has always been called the most beautiful city in Turkey by locals and has developed into Turkey's most liberal and cosmopolitan metropolis since its beginnings in antiquity. Nevertheless, the hectic of Istanbul is missing and the cold of Ankara is not encountered due to the year-round favorable, mild climate; even in the hot Mediterranean summer, the heat is always softened by a refreshing sea breeze.

Homer wrote his epics "Illiad" and "Odyssey" in Izmir 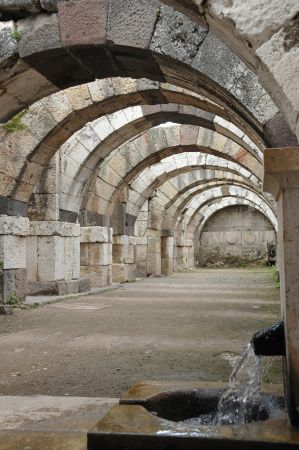 So it is no coincidence that İzmir has become a large center with more than 4 million inhabitants and the second largest and most important trading port in the country after İstanbul. Even in antiquity, it was one of the most beautiful and important sites in the Old World, as great poets and historians report. The city of birth of the blind singer Homer, who wrote his legendary epics "Iliad" and "Odyssey", which have been read to our days, has to be due to its unique location in front of the peaks of Manisa Dağı (Sipylos, 1517 m ) and the Nif Dağı (1510 m) made an overwhelming impression on travelers. Today, behind the palm-lined promenade, terraced rows of houses clinging to the mountain slopes stretch out.

İzmir is the third largest city in Turkey and perhaps the largest when it comes to pure joie de vivre. Mediterranean intensity pulsates day and night in the city. İzmir has flair and colors, a festive mood and equally full everyday life. A really lively and at the same time welcoming city, which knows how to demonstrate its cosmopolitanism and cosmopolitan flair, especially at the annual International Festival in June and July. 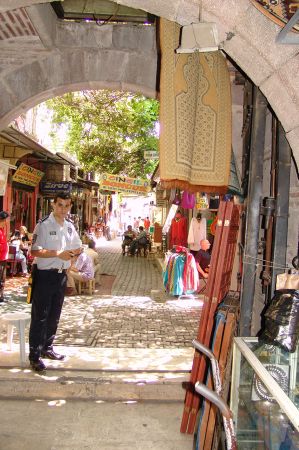 It is a haven of contrasts, also young and yet full of history - with Ottoman caravanserais and magnificent oriental villas to global, trendy spots. No wonder: behind İzmir hides the once legendary Smyrna, even then a great melting pot of cultures.

Here we find inconspicuous teahouses, in which the water pipes are still bubbling, and small bookstores in which bearded Muslims sell pious writings, traditional clans who move with the head of the family in a multi-parted keel line through the old town, but also chic bars and nightclubs, the latest boutiques and outlets by Turkish and international designers. Of the ancient monuments of the rich Smyrna, apart from the Hellenistic-Roman Agorá, the Pagos, which in antiquity served as post-Alexandrian settlement mounds, with its predominantly medieval walling today can be admired.

Not far south of the Fevzi Paşa Bulvari are in the Namazgâh district, about 150 m east of the Eşref Paşa Caddesi, the excavations of the originally from Greek times, after a devastating earthquake in the 2nd century BC. Under Emperor Marcus Aurelius, carefully rebuilt Agorá, where political meetings were held and purchases were made in ancient times. On the west side of the green open space there are still 13 columns with beautiful capitals and on the north side there is a 160 m long three-aisled basilica, which rests on a pillar-supported vault.

Alexander the Great, rises on the 160 m high Pagos Hill 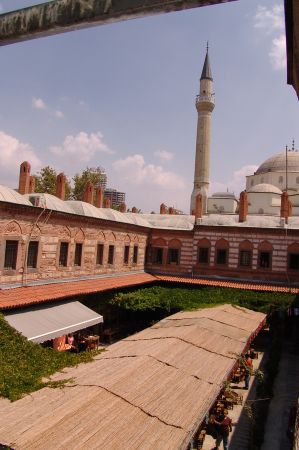 In the east of İzmir, the Samtburg Kadifekale, which once supported the city's acropolis and which goes back to Alexander the Great, rises on the 160 m high Pagosberg (Pegasusberg), which is still crowned by the remains of a medieval citadel with its mighty, once 40 towers, enclosing walls is. Families and lovers stroll through the parks with their pretty tea gardens, and especially at sunset, the incomparable panoramic view of the entire city with its green heart, the cultural park, its port on the Gulf and the mountains is guaranteed to be unforgettable.

An alternative panoramic location is the 51 m high, so-called Asansör in the traditional Jewish quarter of the same name, decorated with many lovingly restored houses, which the merchant Nezim Levi as a connection between the Konak and Güzelyalı districts in 1905 was sensational at the time had a hydraulic elevator built. The public, now electrically operated elevator is a real all-rounder, as it combines an elevator, viewing platform, restaurant and a small museum in one. 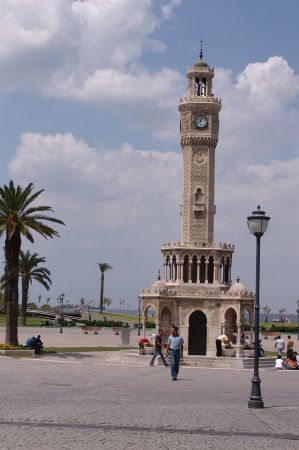 The central square of İzmir is the freshly cleaned Konak. Here, not only the small, colorfully tiled Konak Mosque from 1754 impress, but above all the city's landmark, the filigree "Saat Kulesi", also known as the clock tower, in the Moorish-late Ottoman, also European, painstakingly built with geometrical figures influenced style, which was built in 1901 at the behest of Sultan Abdülhamid to signal the dawn of a new era in the city. The clock on the tower was a gift from the German Emperor Wilhelm II.

From the Konak to the northeast, the Kemeraltı, a historical market, extends to the Mezarlıkbaşı district. The main street of the market is Anafartalar Street, the arch of which was created because the street was built around the former inland port that existed in previous centuries. In the course of time this port entrance was filled in. The nested bazaar district is Orient straight out of a picture book, unbeatably authentic and a treasure trove for everyone who likes to rummage and are looking for souvenirs. In the maze of alleys of the district you can buy fascinating antiques, jewelery and silver, carpets, tobacco, hookahs and leather goods, a wide range of clothing items and the world-famous İzmir specialties, dried figs and sultanas. In the fish restaurants in this colorful area, the local bream species "trança" and "çipura" are conjured up deliciously on the table.

Typical Ottoman hostels from the 18th century and great examples of the architecture of that time are the old caravanserais Çakaloğlu Hanı and Kızılaragası Hanı. The latter, built by Hacı Beşir Ağa in 1744 and extensively restored between 1988-1993, today mainly shows traditional craftsmanship while the idyllic inner courtyard entices you to chat and drink tea.

A few houses of prayer in the vicinity testify to great craftsmanship. The well-prepared Hisar Mosque from 1597 is the largest and most important in the city, but the Yah Mosque from 1854 and Şadirvan Mosque from 1636 are also worth seeing. 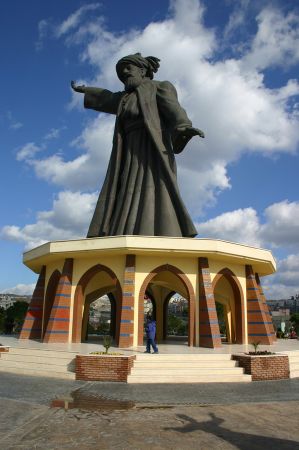 If you haven't already satisfied your hunger in the bazaar, you can do so now in one of the many restaurants, bars and cafes along the İzmir Kordon, especially on the Punta, Kordon Boyu or Pasaport-Kai. North of the Konak, the recently widened lake promenade (actually Ataturk Caddesi), which stretches along the entire city and is closed to car traffic in the evening, becomes the most important meeting point for day and night owls. Nostalgic horse-drawn carts roll through the fresh afternoon breeze and from Alsancak ships drive over to Karsiyaka, a district on the other side of the bay with its own promenade and beautiful parks. History buffs indulge in memorabilia in the nearby Ataturk Museum, the former home of the national hero and founder of the Turkish Republic, while shopping enthusiasts will find what they are looking for in restored townhouses with their elegant wooden balconies in the old merchant and now trendy district of Alsancak.

Those who love it more classical are well served with a visit to an event by the İzmir State Symphony Orchestra or the İzmir State Opera. Although İzmir is an excellent base for visiting the important sites of antiquity, such as Bergama (Pergamon), Efes (Ephesus) and Priene, the Arkeoloji Müzesi of the city as the most important museum on the Turkish west coast with finds from the ancient sites offers visitors the city Western Anatolian region a good alternative, albeit an irreplaceable visit to the sisters of ancient Smyrna.

Struga - shoeshine and bridge jumper at the Black Drin