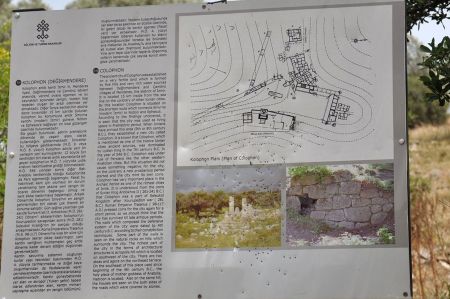 Coming from Lebedos we continue along the west coast towards Kusadasi. After about 22 kilometers you can see the remains of the town of Notion, slightly elevated on a hill, which was of great importance as a former port of the metropolis of Colophon.

The ruins of Kolophon itself lie away from the sea in the hinterland between Yeniköy and Değirmendere.

The port city of Notion was founded by Aeolian settlers, even though the city itself is in Ionia. In addition to its importance as a port city of Colophon, Notion was of great importance to the pilgrims who wanted to trek to the sanctuary of Klaros. So the pilgrims, often coming by boat across the sea, arrived in Notion and walked the few kilometers on the "sacred" road to the oracle of Klaros in the direction of Claros.

Remains of the agora and the city theater 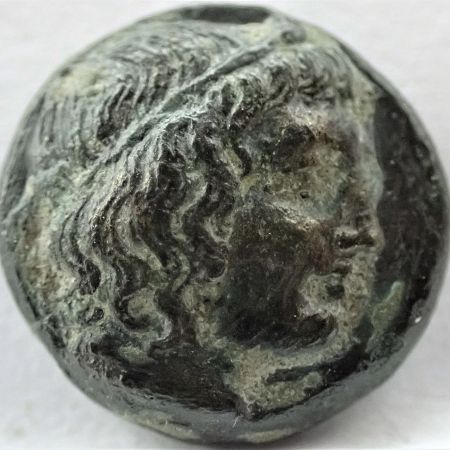 We parked our vehicle and make our way into the fields of ruins. However, only remnants of the former city fortifications, a temple with no meaningful affiliation, remains of the agora and the city theater can be found. The necropolis also only allows minor conclusions. The ravages of time have wiped out almost all traces here.

We decide to continue straight to Kolophon. At Ahmetbeyli we turned left towards Yeniköy and Değirmendere. Already after about 10 kilometers there is a reference to the ruined city of Colophon. The rumor still persists that the city gave its name to the tree resin rosin, which is extracted from the local coniferous wood and is still used today for the strings of a wide variety of stringed instruments. The fact that they have the same name alone suggests a grain of truth in it.

The rosin used for violins is additionally refined with other various substances before it is applied to the horsehair of the bows of the stringed instruments. It is only when the tree resin is applied to the stringing of the bow that the interaction between static friction and movement in the rhythm of the string frequency is generated when bowing. The tree resin is usually rubbed onto the bow by hand as a piece of resin. Different qualities of the rosin provide additional flexibility for the artist. There is rosin for beginners and for experts, who can achieve a larger dynamic and sound range with the choice of the type. As a rule, a soft rosin is used for the double bass, as this creates greater static friction with the somewhat thicker strings of the instrument.

Colophon is one of the founding cities of the Ionian League 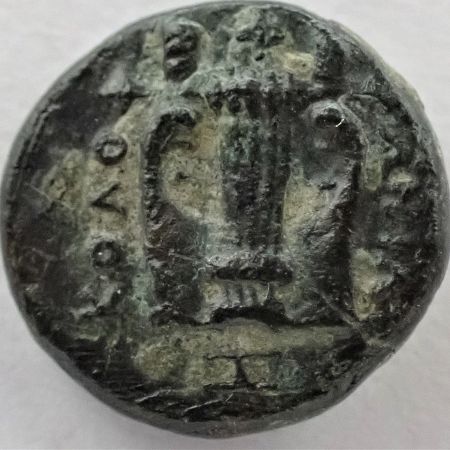 According to current knowledge, it is believed that the city of Colophon was founded by the two sons of the king of Athens Kodros around 1089 BC. Records also state that the philosopher Xenophanes, the poet Mimnermos and the painter Apelles were born in Colophon and spent most of their lives here. Colophon also competes with other cities in the Ionian League for having been the birthplace of the philosopher Homer. However, it has been proven that Colophon is one of the founding cities of the Ionian League (Dodecapolis).

In archaic times, Colophon was considered one of the richest cities in Ionia, which was often compared to Sybaris in southern Italy. However, as a result of membership in the Attic Sea League around 479 BC and the associated loss of power, Colophon steadily lost prosperity. In 430 BC, Colophon even fell to the advancing Persians and was only able to ally itself with Athens again in 409. Only 5 years later it was over again with the Hellenistic affiliation. Colophon again fell to the Persians in 404 BC.

With the conquests of Alexander the Great, things were also in bad shape for Colophon. In the course of the large urban re-establishments such as Ephesus, the population of Colophon was forced to resettle. Here it was Lysimachus, one of the diadochi of Alexander the Great, who sealed the fate of the city of Colophon, like many other cities in Ionia, around 300 BC. Despite the renewed settlement of Colophon in 281 BC after the death of Lysimachus and the union with Notion, the former prosperity and prosperity of the city could never be reached again.

Unfortunately, even in Colophon there are only a few ruins of the formerly so rich city, which, if you have enough imagination, only refer to the size and flourishing of the city. However, traces of the illegal excavations and thefts are very revealing and meaningful for amateur archaeologists when it comes to dealing with cultural assets.

From Friesland crossing the Harz Mountains to Halle – Saale

Belgrade - The strategic importance of the fortress