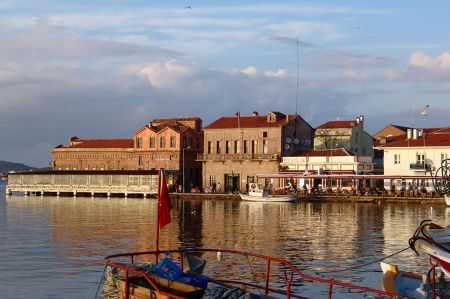 It was alternatively called Kidonies by the town's formerly important Greek population, although the use of the name Ayvalık was widespread for centuries among both the Turks and the Greeks. It is popular with local Turkish holidaymakers and a great place for those who want to escape the crowds and soak up the authentic atmosphere.

Ayvalik is, in our opinion, a beautiful seaside resort on the north Aegean coast with a charm all of it’s own. A visit to Ayvalik is like stepping back into the past yet with your feet still firmly in the modern day present.

Ayvalık is also surrounded by the archipelago of the Ayvalık Islands on the sea and by a narrow peninsula in the south named the Hakkıbey Peninsula. Today, the population of Ayvalık is close to 30,000, which significantly increases during the summer due to tourism. Ayvalık is also close to Bergama (former Pergamon) which is another important attraction for tourists with its ruins, dating back to antiquity.

You can choose your own version as to where the name of Ayvalik derives; it could be the breakdown of the name Ayva meaning quince; or it could be derived from the name of the sea urchin which is called Ayva and which lives in the bays of Ayvalik. But you will be told a different story again for sure!

Various archeological finds and excavations in the region prove that Ayvalık and its environs were inhabited as early as the prehistoric ages. Joseph Thacher Clarke believed that he had identified it as the site of Kisthene, mentioned in Strabo as a place in ruins at a harbor beyond Cape Pyrrha. The islets in the Ayvalık Bay (Ayvalık Körfezi) were also used for settlement purposes, together with Ayvalık, during the late Roman and early Byzantine periods. The constant threat posed by piracy in the region during the previous ages did not allow the islet settlements to grow larger and only Cunda Island (alternatively known as Alibey Island, known among the Greeks as Moschonisia, literally "The Perfumed Island") could maintain a higher level of habitation as it is the largest and the closest islet to the mainland.

After the Byzantine period, the region came under the rule of the Anatolian Turkish Beylik of Karesi in the 13th century and was later annexed to the territory of the Ottoman beylik (principality), which was to become the Ottoman Empire in the following centuries.

Until 1922, Ayvalık(aivali) had a large Greek population. Anecdotal evidence indicates that, immediately after the defeat in the naval Battle of Chesma (Çeşme), the Ottoman admiral (later grand vizier) Cezayirli Gazi Hasan Pasha and his men from the ships who survived the disaster were lodged on their way back to the capital by a local priest in Ayvalık who did not know who they were. Hasan Pasha did not forget the kindness shown to his sailors in the hour of need. and when he became grand vizier, he accorded virtual autonomy to the Greeks of Ayvalık, paving the way for it to become an important cultural center for that community in the Ottoman Empire in the 19th century.

The town was occupied by the Greek Army on 29 May 1919, and taken back three years later by Turkish forces under the command of Mustafa Kemal Atatürk on 15 September 1922. Following the Turkish War of Independence, the Greek population in the town was replaced by a Muslim population from Greece under the 1923 agreement for the Exchange of Greek and Turkish Populations. Most of the new population that replaced the former Greek community were Muslim Turks from Mytilene, Crete and Greek Macedonia. One could still hear Greek spoken in the streets till recently. Many of the town's mosques are Greek Orthodox churches that have been converted.

Ayvalik derives its economy predominantly from the olive. There are around 1,750,000, mainly green, olive groves throughout the area of Ayvalik and Alibey that produce over 7,000 tons of the finest olive oil in the Aegean region, if not the whole of Turkey. Throughout the winter months, the tall brick chimneys of the olive factories release the pungent aroma of olives from the presses below. In the town you will find many shops selling products made from the humble olive. Jams, purees, pickles, olives stuffed with almonds or peppers, black olives, green olives, small olives, big olives and of course, the very best virgin olive oil. You will also find hand made soaps and products carved from the beautiful grained wood of the olive tree.

Ayvalık houses, valuable to be seen with doors, facades, door knockers, windows, woodwork and masonry workmanship, invite people to a historical voyage. In the back streets, the clattering on cobbled streets of horse and carts compete with mopeds, scooters and tractors. The picturesque Ottoman architectural legacy was mostly crumbling and neglected until a few years ago when renovations by mostly wealthy Turks from Istanbul, Ankara and Izmir and increasingly Europeans, is beginning to transform the town into it’s previous glorious heritage