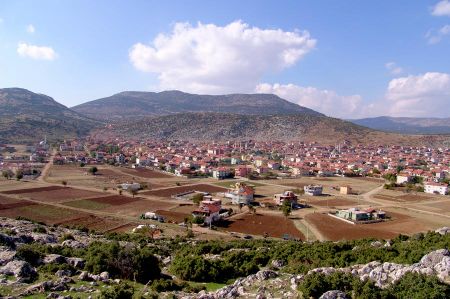 As in several other towns in Turkey and other places in the Southeast of Europe, Kızılca has been touched by the bad influence of migration especially of the young population.

By taking the town Kızılca as an example for the general problem caused by migration, we would like to continue with the often daily discussed subject in Europe, the immigrants’ problem and the explanatory information about the subject which we received from Mayor Ömer Gebeşçe whom we came across on July 12, 2008 during one of our other Aegean coastal tours. Mayor Ömer Gebeşçe returned to Turkey after 30 years of working in Germany and has been now nominated Mayor a second time.

After his friendly invitation we met with him at the local town park and we were immediately offered one of their specialities:

Cherry juice served with ice left over from last winter; stored in caves and providing the ice needs until the following winter. It is a brilliant idea and tastes great. But first of all some information about the town of Kızılca:

The small town of Kızılca is located in the Tavas municipality of the Denizli province, well known by many visitors for the lime travertines of Pamukkale. Kızılca is 60 km south of the Denizli province city centre and 16 km southeast of Tavas. According to the last population count in December 2007 it has a population of 1.988 people. It has a balanced climate due to its altitude of 1.165 metres but, from time to time the winters can have intensive snow falls.

Close to 3500 people from Kızılca are currently working abroad as immigrants, mostly in Belgium, Germany, France, Italy and Austria. Around 1000 people from the town live in the province centre Denizli and in the neighbouring provinces İzmir and Aydın.

When the first people leaving the small town, nobody does really notice any changing. But as soon as a larger number of peple leaving, sure there is a feed back. Empty houses cannot just be filled with new people moving in, they cannot easily being sold within period of time suitable to the migrants cause quite often the idea seems realistic, that most people will come back after a period of working abroad. But reality shows as well, that this is not going to happen. Means first houses staying empty what as well means there is no more tax payment from former owners causing problem for the local community. This at least means, not enough money anymore to keep on working on the infrastructure of the town. In the end this means falling houses, missing infrastructure, so that even more people leave. This is the other side of migration problem, nobody really notices abroad.

Wouldn´t it be much better to bring the jobs to the people instead of vice versa. Is it just a dream to more socialize jobs and people instead of concentrating in some centres just to create more benefit? In the end, doing like that just creates unequality leading to conflicts, first in just local areas and later in whole regions, as we notice nowadays between Europe and Africa.