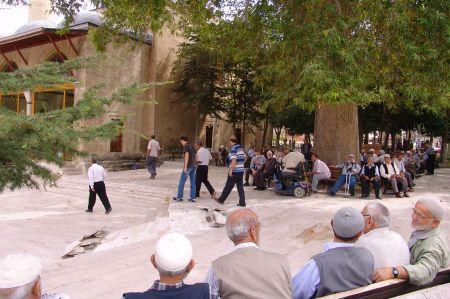 Having been involved in the activities and surroundings of Karaman city lately and as we tried to learn the history of the city, we discovered that there is an ethno/religious side to her name "Karaman".

Meaning "people from Karaman", "Karamanli" defines a group of Christian/Orthodox people who had been living in Anatolia until they immigrated to Greece in the population exchange of 1923. Approximately 60.000 Karamanli had to leave Anatolia because of their Greek/Orthodox belief. A small number of this group still live in Turkey, mainly in Istanbul.

Indeed, their name is the name of a city and her people in Turkey. This name though also continues to live in their surnames. One of the best examples of this is Konstantinos Karamanlis, the former primeminister of Greece whose forefathers come from this Anatolian city.

Karamanli spoke Ottoman Turkish (and still do; their "Karamanli" dialect is in danger of disappearing both in Greece and in Turkey). The dialect consists of many words and phrases taken from Greek as well as old Turkish languages. In 17th Century, the Turkish chronicler and traveler Evliya Çelebi wrote that the Greeks of Antalya region did not speak any Greek but spoke Turkish only.

Initially conveyed only verbally, the Karamlica (Karamanli language) in time became a written dialect as well. To that end, Greek alphabet was used. Traces of the dialect can be found in riddles and on tomb Stones adorned with poetic expressions. Some superb examples of this can be seen in the front gardens of the Balikli Church near Silivrikapi gate on the ancient Istanbul city walls. The tomb Stones contain not only the written expressions but also the symbols of the deceased. The symbols are of the occupation and artisanship of the person and related insignia.

Manuscripts from the 15th and the 18th Century have become as of 1718 the basis for literary works, which amounted to over five hundred books in 19th Century.

In the mean time, its still debated whether the Karamanli are assimilated Greeks who protect their beliefs or Turks who converted to Christianity. There is no clear consensus on the roots of this people. From the Turkish point of view, Karamanli are a branch of ancient Oghuz Turk Clans. This branch is a part of Turkish peoples and converted to Christianity under the influence of Byzantines, and spoke Persian also just like the Seljuk. Members of this people, who still live in Turkey, accept the Seljuk as their fore fathers. As such, their theory suggests that they are Christianized Turks. According to the theory, this Turkic group migrated to Anatolia in about 1000 AD., freely practised their religion under Ottoman Empire and was recognized as a religious minority.

Greek scholars on the other hand look at the story differently. Their theory is based on a discussion of Greek ancestry, which suggests that they are Greek origin people who were able to protect their beliefs but were assimilated by Turkish culture.

Following the conquer of Istanbul in 1453 by the Ottomans; many people from Anatolia were made to migrate to Istanbul. Majority of the inhabitants of the city had been steadily leaving within the last ten years of the Byzantine reign. The Ottomans however placed a great deal of importance on rejuvenating this once thriving city. We learn that the Karamanli came to Istanbul under this migration program and settled in Yedikule suburb and surrounds. They were largely artisans and especially worked in jewelary trade. Their ateliers and shops were located near the Grand Bazaar.

The future of Karamanli and their dialect is in danger of disappearing forever. They had to leave their motherland because of "1923 population exchange" and were forced to live in a culture that is alien to them and the language of which they did not speak. Especially, such assimilation processes as the banning of Turkish language and Greek being compulsory language spoken, forgetting of Karamanli language and severing their ties with Anatolia has caused problems in integrating to Greek society, which resulted in unification amongst this people. This is mostly reflected in the support given to the villages which are their roots.

As a sample of "Travel between Worlds"", here is an extract from a poem that is about this special situation of the Karamanli.

"Even if we are Greeks we speak Turkish;
We neither write and read in Turkish, nor do we speak Greek.
A different language we have indeed;
Our letters are Greek, but we pray in Turkish language."