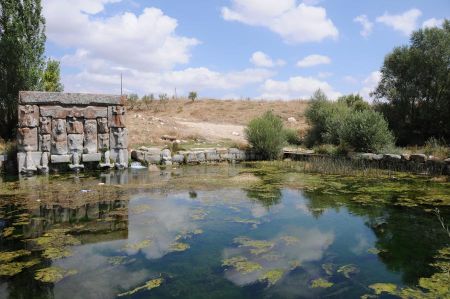 Really wonderful landscapes when passing through the Taurus Mountains
During the main season or on a Turkish public holiday, when all the resorts are bursting at the seams, the lakes of Beysehir, Egridir and Burdur,

lying just behind the mountain range, offer quietness and relaxation.

Just two hours driving from Antalya, in the countryside, there is this green paradise surrounded by the Taurus Mountains, where you can go swimming in a serene landscape or find accommodation in simple hotels and restaurants without any disco music in the background. You can get there on a sight seeing tour to Konya and it is a wonderful change from the tourist atmosphere of the beaches.

Beysehir, the lake about 65 miles east of Konya, is well known for the huge numbers of carp squirreling about in the water. The biggest town, named after the lake, seems to be without any structure or plan. But take a closer look. Even though there is no suitable accommodation available, there are really wonderful small restaurants along the shoreline. After lunch you should visit the wooden Esrefoglu Mosque (about 13th century) which has a huge number of columns. Close to it is the Türbe (grave construction) of the founder from 1301. By renting a boat you can get to one of the twenty islands and, if there is enough time, you should visit the Seldshukian Palace of Kubadabad, which is unique and only reachable by boat.

There are still a lot of different ancient stories about the sanctuary of the Hethitian people, Eflatun Pinari, which can be reached on the road to Isparta after 15 miles. The ancient village with its old ruins is quite impressive and worth the journey along the bad roads to reach it. Lots of monsters carved into the stone next to circles of the sun, which are symbols of god-given powers, are to be seen there. Egridir is a wonderful point to start your expedition to the other lakes, because it is the most beautiful lake for swimming in and, of course, offers the best hotels. You can hire a car at the local tourists’ information centre. The lake is at an altitude of about 1.000 metres up in the mountains, that's why the water is always cold, but really clear and blue. The tree–covered mountains are restful on the eyes, especially when you arrive from Konya across the plateau of Anatolia. Egridir is situated on a peninsular of rocks above the lake.
The ruins of an old Seldjuk castle with a high minaret surround the old Turkish houses, which are built next to the rocks. A dam built of small stones from the riverbeds connects two small islands, Can Ada and Nis Ada, which are covered with the same type of houses. On the island of Nis Ada you can find a small Greek church which still has its original roof. Driving along the lakeshore to the north, you will find isolated beaches ideal for swimming and diving.

About two kilometres outside of Burdur, and about 5 kilometres long, is the beach area of Cenid, which has a variety of water sports on offer on the salty lake. The best place for swimming is at the western end of the lake at a place called Salda. The water is always a shimmering green colour and there are lots of restaurants, picnic areas and camping sites along the beaches. The most important site of this area to visit is the ancient Sagalassos, which was built high above, on a plateau south of Isparta, next to Aglasun.
Most of the ancient ruins, especially the old theatre, are in excellent condition. Whenever possible, you should spend a whole day there because the ruins can only be reached by walking from Aglasun. The walk takes about one hour.

Only a very few people visit this natural and unspoilt area of woods. It is said that bears, wolves and wild pigs live there, while you can fish for carp and perch in the lake.
Only rarely will you get someone else passing by. Just a few tents of migratory shepherds, who keep their flocks here, will indicate human life. This area is a paradise for backpackers, who are allowed to stay in tents along the lake.
The fish is a delicious speciality in the restaurants here and should not be missed. Carp (sazan) and perch (levrek) can be found in huge numbers in the Egridir Lake, as well as small crabs. The cuisine is of a high standard and certainly cheaper than the resorts on the coastline.