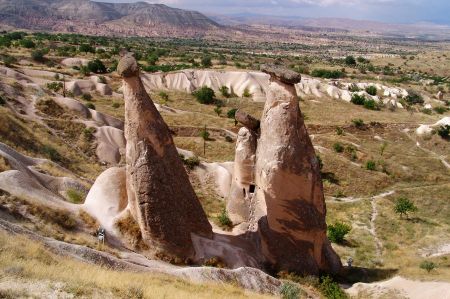 UNESCO-World Cultural and Natural Heritage Cappadocia is located at the centre of a region which used to have intense volcanic activity and it added a lot of value to the lay of the region. While Anatolia basically consists of big lakes and tropical swamps, it can be seen that animals, plants and carnivores dating to very old times were dominant in the region.

Due to the rising of Toros mountains located to the south a little bit more, large amounts of lava in Central Anatolia started to surface and the volcanic nature of Cappadocia started to form like this.

At the perimeter of mentioned volcanoes, Erciyes Mountain (3916 meters), Hasan Mountain and Melendiz Chain Mountain are located between the cities of Kayseri, Aksaray and Niğde. Especially after the neogene period, which is very old in terms of world history, a lot of big explosions took place. During these explosions, lavas and also big amounts of volcanic tuff ashes were spread over an area of 10.000 km². Today, it is defined as evisceration area of Cappadocia (Barsch, 1935). With the newly formed volcanic mountains and volcanic tuff layers, the centre of Anatolia covered the swamps and lake plates located in the depths and exhibited a new formation.

These volcanic tuffs, which drew close to each other over the centuries and formed with regular ruptures, created a stone type which has a strong structure. Depending on the position and expansion horizon, these stones were carried to current day with extraordinary speed. During expansion and resting periods, volcanoes continued to grow. Strong ruptures took place in the transition period between Pliocene and ice age, these ruptures contributed significantly to the formation of today’s regional environment. Volcanic motions continued until old times and they were reflected in the wall paintings in Çatal Höyük in Stone Age (approx. B.C. 8000), which is the oldest habitat located at south Konya. Up until the last century, in the Erciyes mountain region in Kayseri, active craters which stopped their activities recently and smoke columns were reported.

As a consequence of these volcanic explosions, region of lakes and valleys around Ürgüp in the ancient times were spread to Kızılırmak River. This spreading lead to earth and clay sediment, and these sediments gained an important meaning for the pottery city of Avanos.