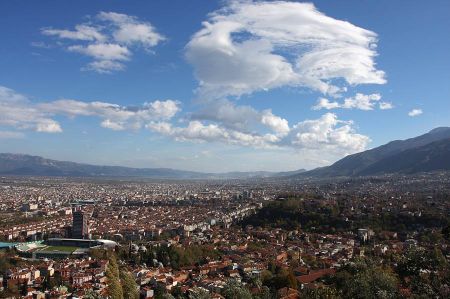 Bursa, the fourth biggest town of Turkey and capital of the district of Bursa in the western part of Turkey, now has 1.6 million inhabitants. About 90 kilometres from Istanbul, and at the foot of the Uludağ, this fast growing town has all that modern towns can offer.

All around the countryside is covered with lovely green trees and bushes close to some of the most famous and healthy springs. Only about 20 kilometres away are the lovely bays of Gemlik on the Sea of Marmara.

Some historic dates of Bursa

In ancient times the town was known as Prusa, sometimes said as Prusa ad Olympum, which was founded in 188 B.C. by King Prusias I of Bithynien.
From 74 B.C. Prusa and all of Bithynien was part of the Roman Province of Bithynia. In 257 B.C. the town was plundered by the Goths and so some time later a huge town wall was built to prevent similar future events. It is known that Prusa had its own Bishop since 325 A.D. and it later became a settlement for the exiled people of Vetranio. During the Byzantine period Prusa was well known because of its thermal baths, known as Basilika Thermal, close to the modern suburb of Cekirge. The baths were used by most of the ancient rulers of that time. One of the most important visitors was the Byzantine Queen Theodora.
In 1326 A.D. Prince, and later Sultan Orhan I conquered the town and Bursa became the capital of the Ottoman kingdom. In 1368 residence was given to Edirne. In 1402 Bursa was plundered by hordes of Mongols, led by Timur Lenk, who were lucky enough to obtain most of the state treasure of the Ottoman Empire. Under the leadership of Mehmet I, Bursa became wealthy and powerful again. A huge fire in 1801 and an earthquake in 1855 destroyed large parts of the town centre. The biggest problem in economic development for Bursa happened when, in 1923 and based on the Treaty of Lusanne, huge groups of the mainly Greek population needed to be repatriated and left Bursa. There is still no railway connection available in Bursa.

Probably the most famous and worth visiting sight is the monument of Sultan Mehmet I, the so called Yesil Turbe. There are also three Islamic churches, built between 1380 and 1420,
The Large Mosque, called Ulu Cami, the so-called Green Mosque and the Orhan Gazi Mosque. All are well worth a visit.
Also of great interest are the monuments of the first Ottoman Sultans of Osman I and Orhan I, as well as the bazaar, the most important part of which is the silk bazaar, or Kozan Han.
The 2500 metres-high mountain Uludag, which lies in the National Park of Uludag, is the most well known winter sports resort of Turkey. To climb to the top takes about an hour by bus or car. Next to the Yesil Turbe you will find the first Turkish cable railway, opened on October 29th, 1963, called Teleferik, which is about 4817 meters long and reduces the time to reach the top of the Uludag to 20 minutes.

Other important sights in Bursa are;

•    The archaeological museum of Bursa called ‘Arkeoloji Müzesi’
•    ‘Cumalıkızık’, one of the very rare ancient villages in Turkey, were you can find old style Ottoman houses. You can also visit the ethnographical museum known as ‘Cumalıkızık Etnografya Müzesi’.
•    A very traditional type of shadow theatre called Karagöz near the suburb of Cekirge.
•    The museum for traditional Ottoman clothing and jewellery, called ‘Ulumay Osmanlı Halk Kıyafetleri ve Takıları Müzesi’
•    The museum of Tofas automobiles, known as ‘Bursa Anadolu Arabaları Müzesi’
Troy - Heinrich Schliemann
Even compared to other famous places in Turkey, Troy is one of the most famous ancient cities. The history of the city goes back to Homer, who wrote about the history of Troy around three thousand years ago in his famous epic the ‘Iliad’.
The main theme of this story is the king of Troy kidnapping the beautiful Greek woman Helena and taking her to Troy. At that time Helena was married to the king of Sparta. In order to get Helena back the Greeks tried to conquer Troy quickly. After a couple of years they realised that this was impossible so they used the famous trick of building a huge wooden horse. The people of Troy pulled the horse into the town, thinking this was a present from the now-departing Greek soldiers. Later, when the horse was in the centre of the town, the Spartans got out from inside the horse and were able to defeat the surprised soldiers of Troy.
The German scientist Heinrich Schliemann was fascinated so much by this story that he did everything he could to find the ancient places where this had happened. During his excavations he found the great gold treasure of Troy and because of this he is probably the person who brought ancient history back to life, which is still of great interest today.

Due to neglect there are just a few ruins left and so Troy cannot really be compared with other places like Ephesus or Pergamon. Even so, because of the ancient legends about the city, Troy is still a magnet for visitors.